Harsh Varrdhan Kapoor confirmed that Vicky Kaushal and Katrina Kaif are indeed dating each other. Check out how netizens reacted to the same. 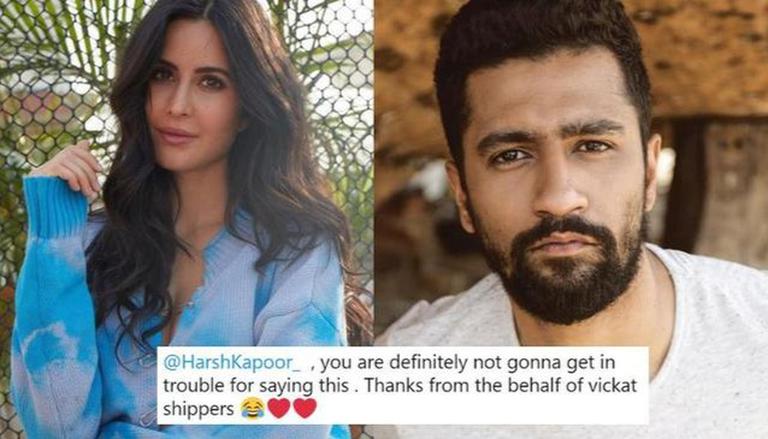 
The dating rumours of Vicky Kaushal and Katrina Kaif have been doing rounds for a long time now. Though the duo never spoke about their relationship, Harsh Varrdhan Kapoor recently confirmed that the duo is dating. The actor made an appearance on a talk show and during a fun game, he confirmed that Vicky Kaushal and Katrina Kaif are dating each other and ever since the duo's fans cannot stop thanking the actor for sharing this big news with them.

Ever since Harsh Vardhan Kapoor confirmed that Katrina Kaif is actually dating Vicky Kaushal, fans of the duo have been expressing their happiness on social media. While one user mentioned, "Finally, I can sleep in peace", another user wrote, "@HarshKapoor_, you are definitely not gonna get in trouble for saying this . Thanks from the behalf of vickat shippers". There were several users who shared videos of Katrina and Vicky's first interaction or when they had a fun conversation at an award ceremony. Fans also added the hashtag #Vickat to cheer for their favourite couple.

If vicky nd katrina marriage is happening then i want to go ishaan from VICKY sIDE, 🤩🔥the josh is getting too higher UFF#VickyKaushal #ishaankhatter pic.twitter.com/f3daupyq6E

@HarshKapoor_ , you are definitely not gonna get in trouble for saying this . Thanks from the behalf of vickat shippers 😂❤️❤️#vickat #vickykaushal #KatrinaKaif pic.twitter.com/1zP8PudGUG

Vicky and Katrina r made for eachother. That's the tweet. That's it. Now haters can burn .#Vickat https://t.co/swDedxTS2C

‘Vicky Kaushal and Katrina Kaif are together’, confirms Harsh

On a talk show on Zoom channel, Harsh Varrdhan Kapoor made an appearance as his movie Ray is about to release on Netflix. The actor played a fun segment called Quickie, in which the host asked him to name an “industry relationship rumour that he believes is true or just a PR move”. Harsh Varrdhan responded “Vicky and Katrina are together, it’s true.” After saying this, he quickly added, “Am I going to get in trouble for saying this? I don’t know.”

On the work front - Vicky Kaushal and Katrina Kaif

On the work front, Kaif will be next seen in the movie Phone Bhoot. She will be featured alongside Siddhant Chaturvedi and Ishaan Khatter. The first look of the movie was shared by the makers where the trio was seen donning black suits. Katrina Kaif also joined the cast of Rohit Shetty's Sooryavanshi, alongside Ranveer Singh.

READ | 'The Family Man 2': Vicky Kaushal is convinced that Chellam Sir is "greater than" Google

READ | Vicky Kaushal winks in a mirror selfie as he gets haircut; adds funny caption to the post