Harshvardhan Kapoor Or Kylie Jenner wore a similar sneaker and Harshavardhan posted a pic on his Instagram which read, Who Wore It Better? Anand Ahuja's comment

Who wore it better, Harshvardhan Kapoor or Kylie Jenner-

Kylie Jenner is currently quarantining at home. She posted the following picture with lyrics borrowed from Tyga and Curtis Roach's Bored In The House.

Anand Ahuja, husband of Sonam Kapoor also dropped in the comments section on Harshvardhan Kapoor's post with opinions of his own and assumed that it is a "tough" decision to make! 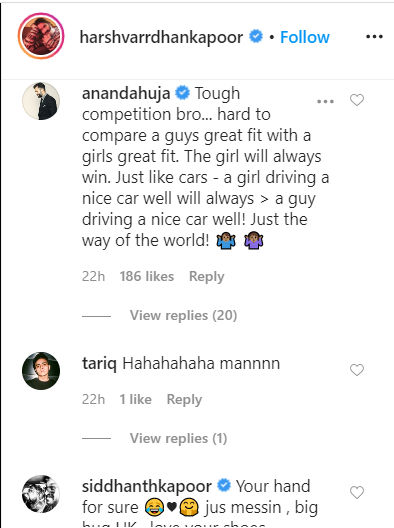 Anand Ahuja, husband of Sonam Kapoor also posted a picture of Anil Kapoor wearing sneakers. Actually the love for sneakers runs in the Kapoor family. Anand Ahuja had shared then and now photos of Anil Kapoor, in 2018 and in both the photos Anil Kapoor can be seen wearing same sneakers.  Anand Ahuja revived the memory and his comment read, "Nike then (in Saheb, 1984) and Nike now (in Race 3)"

WE RECOMMEND
1 month ago
Sonam Kapoor asks a quirky question in her post; hubby Anand Ahuja has the perfect reply
1 month ago
This Day That Year: When Sonam Kapoor revealed that hubby Anand Ahuja had adopted her name
6 months ago
Harshvardhan Kapoor's cryptic post leaves fans wondering 'who' it is
3 months ago
Anil Kapoor and Harshvardhan Kapoor's combined net worth is staggering; check details
1 month ago
Kylie Jenner gets rid of her acrylic nails and shows off her natural nails