Despite divided reviews, Bollywood actors Shahid Kapoor and Kiara Advani's 'Kabir Singh' has been doing great at the box office. The film which is a Hindi remake of Telugu film 'Arjun Reddy' was helmed by the same director Sandeep Reddy Vanga.

As the film touched success, the original hero of the romantic saga Vijay Deverakonda extended congratulatory greetings to Kiara Advani. The actor, who starred in the lead of the Telugu version of the film- 'Arjun Reddy',  sent flowers to Kiara with a heartwarming congratulatory note.

Sharing the picture of the same on her Instagram story, the Bollywood diva wrote, "Thank you Arjun" and tagged Vijay in the post. 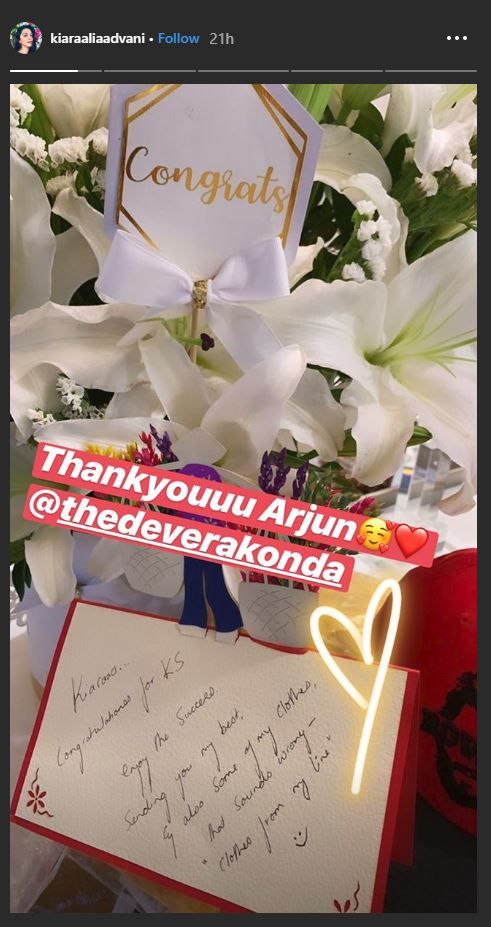 Meanwhile, the film 'Kabir Singh' narrates the story of an alcoholic surgeon named Kabir Singh, who has anger management issues. He goes on a self-destructive path after being separated from his ex-lover.

The film has hit the theaters on Friday, June 21, and has emerged as the biggest opener of Shahid Kapoor. It has grossed over Rs. 100 crore just within 5 days of its release.

READ: Hailed By Critics, Here's How Ayushman Khurrana-starrer 'Article 15' Is Doing At The Box Office

However, the film has recorded mixed responses from the viewers. It has been dragged into controversy post its release as several critics and social media personals have described the film as 'misogynistic' that celebrates toxic masculinity.

PEOPLE HAVE PLEDGED SO FAR
WATCH | Brand new 'Super 30' song out, netizens say Hrithik Roshan's 'Basanti No Dance' track has a lot of heart
Hailed by critics, here's how Ayushman Khurrana-starrer 'Article 15' is doing at the box office
Yuvraj Singh to make appearance in 'The Office'
Malaika Arora's decade-old album songs that one might have missed out
Homi Adajania opens up on working with Irrfan Khan, calls his experience 'enriching'
Need both male, female gaze to create rounded characters: 'Thappad' co-writer Mrunmayee
Kiara Advani's stylish headgears are definitely something to add to your accessories
Bhumi Pednekar's Instagram has some of her most adorable childhood pictures
DO NOT MISS
NADELLA'S RESPONSE TO FAV CRICKETER
'NEHRU WAS ENVIOUS OF AMBEDKAR'
DHONI'S NET SESSION
MALDIVES THANKS INDIA ON EVACUATION
INSPIRED OR COPIED?
CAT'S REACTION AMUSES TWITTER