The actor who is training hard for his upcoming sports drama '83' can be seen flaunting his abs in the recent picture.

Bollywood actor Ranveer Singh is one of the most promising stars of the industry. With intense performance on-screen never fails to his handsome stature, the actor never fails to mesmerize his fans. Recently, he grabbed many eye-balls yet again, as he posted a shirtless picture of himself on Instagram and it is an absolute motivation to cut 'carbs' from the diet.

The actor who is training hard for his upcoming sports drama '83' can be seen flaunting his abs in the recent picture as he funnily captioned it saying, "Me looking at you eating carbs like"

Fans have been very must impressed by his well-shaped body as they have praised it widely on social media. They have hailed Ranveer as 'fitness goals' as the picture went viral within minutes of its release. 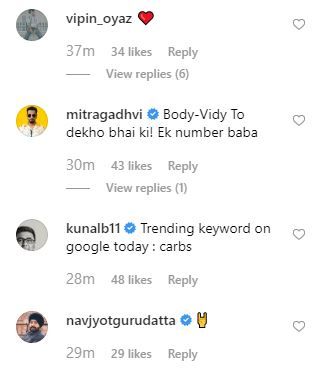 Meanwhile, Ranveer's '83' chronicle India's historic win under Kapil Dev's captainship when the Men in Blue defeated West Indies in the final to clinch their first-ever World Cup trophy in 1983 at Lord's stadium, England. He will be seen essaying the role of legendary cricketer Kapil Dev in the upcoming venture. His first look as the former cricket team caption surfaced recently.

Ranveer is often seen practicing for the sports drama. He is trained for the role by Kapil Dev himself as several pictures and videos of the 'Gully Boy' actor interacting with the legendary cricketer surfaced on the internet. The sports drama helmed by Kabir Khan will also star Deepika Padukone as his wife. It is slated to release on April 10, 2020.