'Heropanti 2' vs 'Runway 34' Box Office Collection, Day 7: Ajay Devgn-starrer Runway 34 continues to take the lead on the seventh day. Here's what we know. 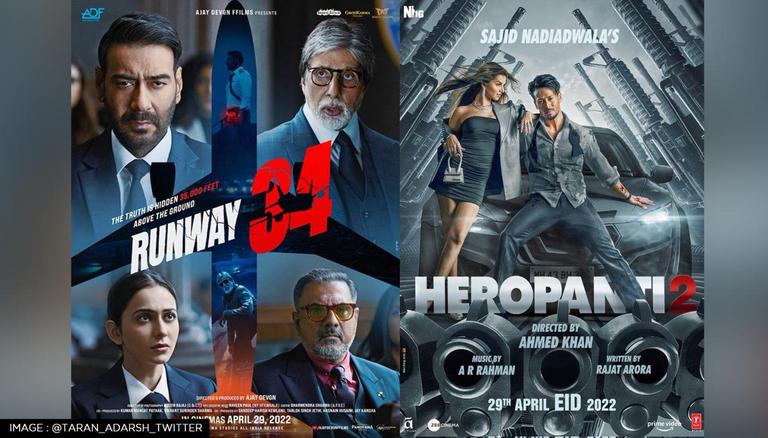 
As two of the highly-anticipated Bollywood films, Heropanti 2 and Runway 34 clashed at the ticket windows recently, both have been putting up a tough competition despite the roaring success of Yash starrer KGF Chapter 2. While Tiger Shroff's film was able to earn around Rs 15 crore at the ticket windows in its opening week and Ajay Devgn's heading to the Rs 25 Cr mark, read on to know how much Heropanti 2 and Runway 34 minted at the Box Office on Day 7.

Runway 34, as per Sacnilk and other media reports, earmarked around Rs 1.7 cr on day 7 while minting a total of Rs 24.36 Cr. The collection was, however, lesser than anticipated as the film was in cut-throat competition with Yash’s film, KGF Chapter 2, which was released around the same time. And now, with the release of the Marvel film, Doctor Strange in the Multiverse of Madness, the competition will continue thereafter.

On the other hand, after performing low on the first four days of the release, Tiger Shroff and Tara Sutaria-starrer Heropanti 2 continue their struggle on the seventh day of its release as well while minting Rs 1.25 Cr crossing the Rs 20 Cr mark overall. Meanwhile, Heropanti 2 kept falling in a considerable way, earning just Rs 1.20 crore on Monday. It had earmarked Rs 3.70 crore the day before, and the drop, in this case, as compared to Friday, was massive, because it had opened at Rs 6.70 crore.

Runway 34 is a gripping mystery thriller, that centres around the life of a pilot who confronts a legal tussle following a tragic air incident. Ajay Devgn is also the director and producer of the film, apart from featuring in the lead role in the movie. Apart from Devgn, the film also stars Amitabh Bachchan, Rakul Preet Singh, Boman Irani, Angira Dhar, Aakanksha Singh, and YouTuber Ajey Nagar among others. The script of the film is penned by Sandeep Kewlani and Aamil Keeyan Khan.

Heropanti 2 has performed even worse than its predecessor. Heropanti 1 had also taken a similar opening to the second instalment but had grown to over Rs 8 crore on Sunday. The film's 1st-weekend collections were Rs 21 crore. The point to note was that the film was led by newcomers, Tiger and Kriti Sanon making their debuts, unlike the former being an established star today, and it was in 2014 when ticket prices were lower.