Hrithik Roshan's latest throwback picture from 'Fighter' prep caught the attention of his actor girlfriend Saba Azad who hyped him up via the comment section. 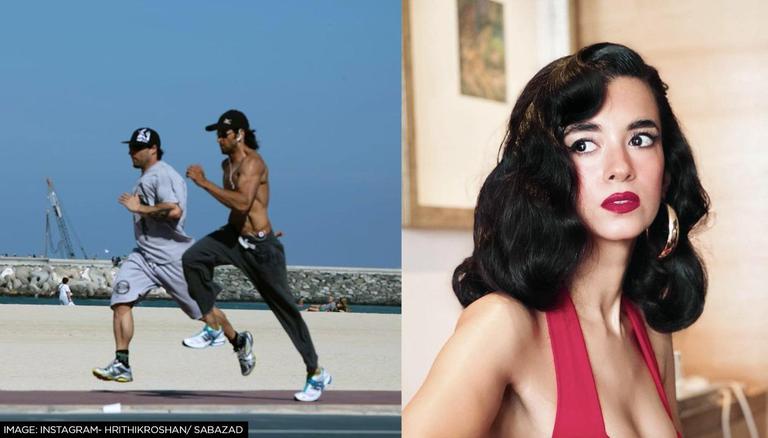 
Bollywood star Hrithik Roshan is not only known for his ace acting skills but also for his muscular physique in the film industry. The actor, who was last seen shooting for his upcoming film Vikram Vedha, is now gearing up for the shoot of his upcoming high-octane action drama Fighter. While the actor has built a physique for his upcoming film, he recently shared throwback pictures with his trainer from the movie's prep. The pictures also caught the attention of his actor girlfriend Saba Azad who hyped him up via the comment section.

After Vikram Vedha, Hrithik Roshan is seemingly gearing up to shoot his upcoming film Fighter. Taking to his Instagram handle, the actor shared throwback pictures of him running shirtless with his trainer Kris Gethin. He could be seen flaunting his muscular physique and leaving his fans drooling. Sharing the photo, the actor penned, "@krisgethin are you ready ? Hehe. I’m not. Got to get back fighter mode."

The actor received a lot of love for his picture and over one million hits. His actor girlfriend Saba Azad also hyped him up and cheered for him. She wrote, "Yes you is. you were born ready!! Go ninja!!" to which he replied, "how about a picnic." The actor's War co-star Tiger Shroff reacted to the photo with a fire emoji, while choreographer Piyush Bhagat hailed him and wrote, "If this is where the transformation begins, I can't imagine what the end result will be. beast."

Hrithik Roshan, who was last seen in the 2019 film War, will soon be seen starring opposite Deepika Padukone in Siddharth Anand's Fighter. The movie will mark the maiden collaboration of Hrithik and Deepika. While the movie is scheduled for next year, it will also see Anil Kapoor in a pivotal role.

Meanwhile, Hrithik Roshan and Saba Azad are seemingly going strong. The two never fail to give away major couple goals and are often spotted hanging out together. They recently returned from their Europe vacation and also shared several pictures from the getaway. Take a look at their pictures here.