Ahead of India's Independence Day, the patriotic song 'Hum Hindustani', sung by legends including Lata Mangeshkar, Amitabh Bachchan has been released. 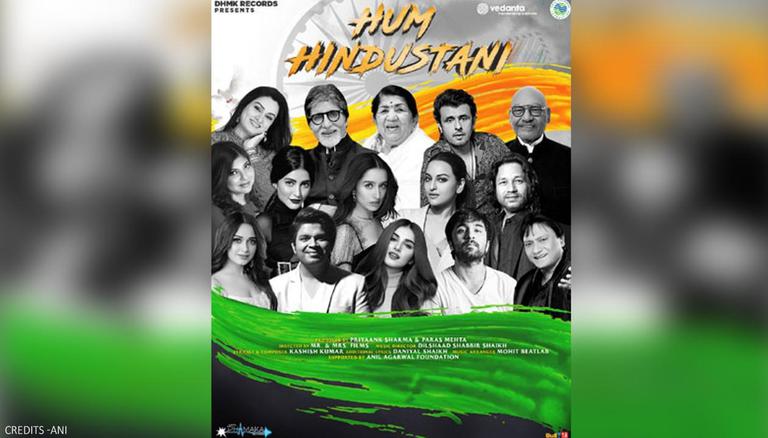 
As India's Independence Day is just around the corner, a number of mega artists from the Indian film fraternity have joined hands to lend their voices for the patriotic anthem titled Hum Hindustani. The soulful track, produced under the music label Dhamaka Records, by Priyaank Sharma and Paras Mehta, released on Friday, August 13. The anthem is a beautiful symphony of soulful lyrics, a breathtaking tune and is sung by 15 legendary personalities from the Indian film industry. Dilshaad Shabbir Shaikh is the music director of the patriotic song.

A song has received this feat for the first time ever and carries an important message required in today's trying times in the country. It urges everyone to unite and spread hope for a better tomorrow and faith using the medium of music. As icons from all walks of the industry come together, it is sure to hit the right chord with every Indian across the globe.

The phenomenal artists, musicians, and industry stalwarts that have crooned together for the song are Lata Mangeshkar, Amitabh Bachchan, Padmini Kolhapuri, Anil Agarwal, Sonu Nigam, Kailash Kher, Alka Yagnik, Shabbir Kumar, Shraddha Kapoor, Sonakshi Sinha, Shruti Hassan, Tara Sutaria, Ankit Tiwari, Siddhanth Kapoor, and Jannat Zubair. Joining them is a philanthropist, Anil Agarwal, who was touched by the rendition. The track is supported by Anil of the Anil Agarwal Foundation, Vedanta Group and promotes unity, a sense of patriotism, hope, and faith.

Speaking on the occasion of the song's launch, the co-founder of Dhamaka Records, actor Padmini Kolhapuri expressed her excitement about her son, Priyaank is helming the song that is dedicated to frontline warriors across the world. She was also glad about the powerful star cast on board the project, ranging from yesteryear veterans to gen-next superstars.

Padmini Kolhapuri said, "It gives me immense pleasure that my son Priyaank along with Paras Mehta is taking the Kolhapure music legacy forward through Dhamaka Records with his first track dedicated to all the frontline warriors across the world in these most trying and challenging times! All the legends from Ms Lata Mangeshkar, to superstars like Amitabh Bachchan and today's gen-next superstars, have come forward to support the first track! We are very excited about it !".

Announcing the song, Amitabh Bachchan had also expressed how it puts forth the message of unity. Taking to his Twitter account, the legend, along with the poster, wrote, "Today the entire world wants to say this...Na Haare The Na Haare Hai .. #HumHindustani a song dedicated to all of you, from all of us .. Releasing this Independence weekend on 13th August,”.

READ | Lata Mangeshkar shattered by Padma Sachdev's death; Says 'She and her husband were family'

T 3994 - Na Haare The Na Haare Hai .. #HumHindustani a song dedicated to all of you, from all of us .. Releasing this Independence weekend on 13th August .. #jaihind #humhindustani🇮🇳 pic.twitter.com/CbFE7lVzPe