'I'm A Khaala Now', Parineeti Chopra's Post For Sania Mirza's Son Izhaan Is All Kinds Of Adorable And Netizens Agree

Sania Mirza's son Izhaan Mirza Malik has found a khala in none other than Parineeti Chopra.

Sania Mirza's son Izhaan Mirza Malik has found a khala in none other than Parineeti Chopra.

The actor treated her fans with a love-filled picture of herself with the five-month-old boy. In the picture, Izhaan can be seen sitting on Parineeti's lap and happily chewing on her hand."I'm a khaala now!!!! Izzu is edible and I want to eat him, but for now I'm allowing him to eat my hand @mirzasaniar Can I keep this child foreverrrrrr," she wrote alongside the photo.

I’m a khaala now!!!! Izzu is edible and I want to eat him, but for now I’m allowing him to eat my hand 💋💋 @mirzasaniar Can I keep this child foreverrrrrr 😍😍

The tennis champion was quick to respond in the comments section. She wrote, "Awee", and we couldn't agree more!

Ever since the picture has been posted it is going viral on social media with netizens saying all kind of adorable and cute things. 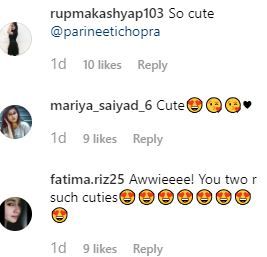 As per media reports, the 30-year-old actor decided to take some time off from shooting to visit Sania's house in Dubai.

Sania, who is quite active on the photo-sharing application, often posts Izhaan's pictures on Instagram. Recently, Sania posted a selfie with Izhaan on the social media platform, on which, Priyanka Chopra commented, " Soooo cute."

In April 2018, Sania took to her official Twitter handle and announced the arrival of 'Baby Mirza Malik'. They welcomed Izhaan on October 30 last year. On April 12, 2010, Sania and former Pakistan skipper Shoaib Malik got married in a traditional Hyderabadi Muslim wedding ceremony at the Taj Krishna Hotel in Hyderabad followed by a Pakistani wedding.

On the work front, Sania will be back playing tennis in 2020 during the Tokyo Olympics.

Meanwhile, Parineeti's latest outing 'Kesari', starring Akshay Kumar is doing well at the box office and has already crossed Rs 100 crore mark.She is currently shooting for the upcoming biopic on badminton champion Saina Nehwal after Shraddha Kapoor opted out of the project. Parineeti also has other films in her kitty including 'Sandeep Aur Pinky Faraar' and 'Jabariya Jodi'.