IN PICTURES | Priya Prakash Varrier Is Breaking The Internet Once Again. Here's Why

Priya Prakash Varrier became an overnight sensation with her wink around this time last year after people fell in love with her on first sight.

Priya Prakash Varrier became an overnight sensation with her wink around this time last year after people fell in love with her on first sight. Recently, the actress took to Instagram and posted a picture where she can be seen all in smiles while donning an ethnic outfit.

Ever since the picture has been posted on social media, it has been going viral on the internet and has already garnered more than 30,000 likes and hundreds of comments.

From the comments, one can say that the netizens couldn't get over how 'beautiful' and 'charming' the actress' smile was. Many also remarked that she looked absolutely perfect in the ethnic look. Read some of the reactions below: 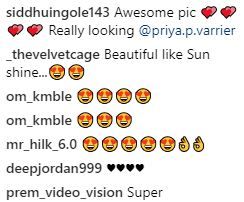 On the work front, the actress was last seen in her debut film, 'Oru Adaar Love'. However, although the wink from the film made her quite famous, the film failed to impress the critics and the audience and thus tanked at the box office.

Varrier is also set to make her Bollywood debut with 'Sridevi Bungalow', but it has been dragged into controversy after the teaser of the film released a while back. The husband of the late actress Sridevi, filmmaker Boney Kapoor has also sent a legal notice to the makers of the film for depicting scenes that implied parallels between the character and the demise of the veteran actress.