Shah Rukh Khan's daughter Suhana is yet to make her Bollywood debut but the young lady is already a hit among the audience because of her sartorial fashion choices.

Shah Rukh Khan's daughter Suhana is yet to make her Bollywood debut but the young lady is already a hit among the audience because of her sartorial fashion choices. In a latest update, the 19-year-old who is often seen shuttling between Mumbai and England was recently spotted attending a family wedding. Khan's cousin, Alia Chhiba shared an Instagram story where she and Suhana can be seen striking a pose from what seems to be the Mehendi function. The 19-year-old can be seen making heads turn in a pista coloured green salwar suit while Alia compliments her in white.

READ: Ananya Panday's Birthday Wish For Suhana Khan With A Throwback Picture Featuring 'Charlies Angels' Is Too Cute For Words 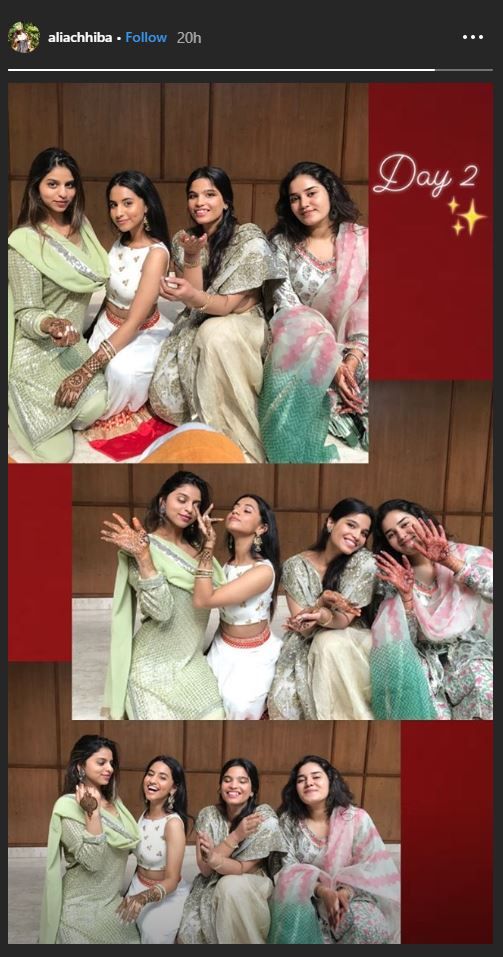 Although not many pictures are not available, the group of youngsters seems to be having a blast!

Suhana is yet to make her debut in Bollywood, but already has an immense fan following on social media.

Holding her in my arms again thanks to Vogue. ‘What imperfect carriers of love we are...” except when it comes to our children. So sending u all my love & a big hug. Hello Suhana Khan! pic.twitter.com/RrkhJ8kfz5

Besides having several fan-pages and a significant number of followers, the 18-year-old was also featured on the cover of an ace fashion magazine. Stunning on the cover of Vogue's August 2018 issue, Suhana was seen wearing a soft-colored off shoulder dress looking absolutely ethereal. Moreover, every picture of the star kid that makes it up to the internet goes viral on social media.

As per media reports, Suhana will be making her Bollywood debut after completing her education and getting enough training for the same.