Instagram deleted Kangana Ranaut's post where she had written about 'demolishing COVID'after contracting the virus. The actor had a quirky reaction to it. 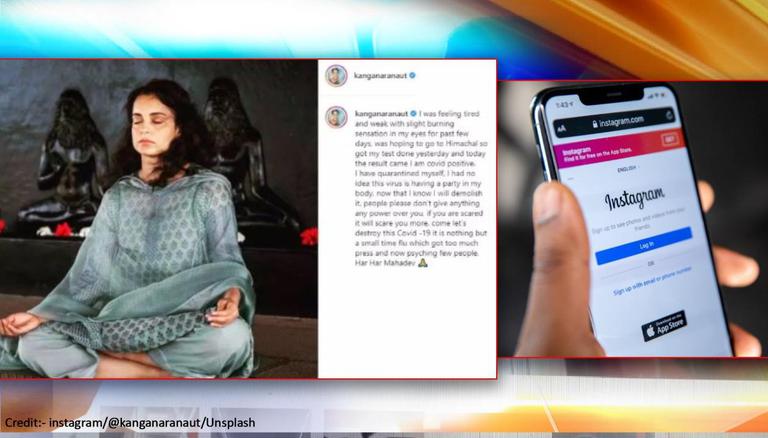 
Kangana Ranaut’s on-off relationship with social media platforms has been well-known since her official venture last year. After numerous digs at Twitter CEO Jack Dorsey, the actor was permanently suspended from the microblogging platform for violation of policies amid her controversial posts. Now, she attacked Instagram as well, claiming that the platform deleted the post where she announced that she was diagnosed with COVID-19.

Kangana had trivialised COVID-19 by calling it a ‘small-time flu’ while making the announcement on Saturday that she had contracted the virus.

She had written, “I was feeling tired and weak with slight burning sensation in my eyes for past few days, was hoping to go to Himachal so got my test done yesterday and today the result came I am covid positive."

"I have quarantined myself, I had no idea this virus is having a party in my body," she wrote.

"Now that I know I will demolish it, people please don’t give anything any power over you, if you are scared it will scare you more, come let’s destroy this Covid -19 it is nothing but a small time flu which got too much press and now psyching few people," (sic) Kangana had posted. 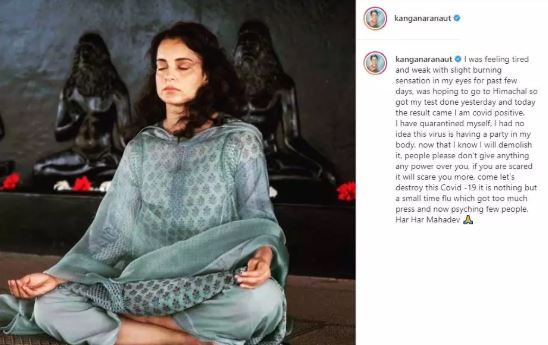 The 33-year-old now claimed that Instagram deleted the post as ‘some were hurt’. She joked that she had heard about terrorists and communists sympathisers’ on Twitter, but ws found it awesome’ to know that there was a ‘COVID fan club’ too. The four-time National Award winner also quipped that this was the situation just after two days on the platform, where she felt that she could not ‘last her more than a week.’ 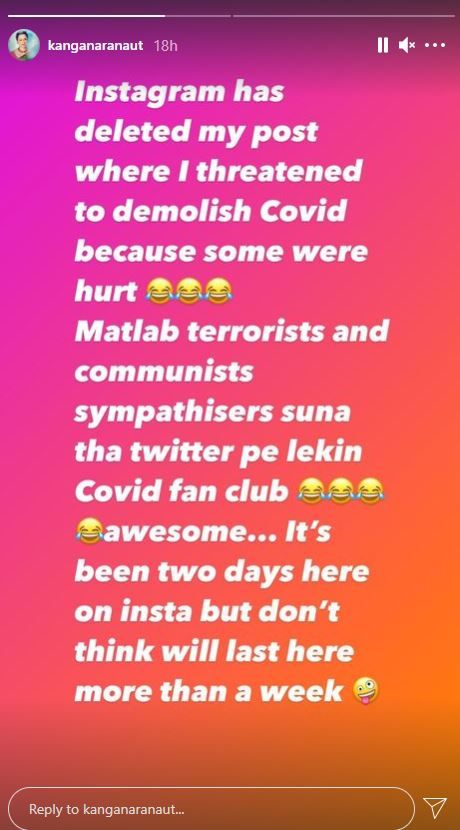 This is not the first time that she has expressed her displeasure at the Facebook-owned company. In March, she had accused Instagram of reducing her followers by 5 lakh, while alleging that there was a ‘smear campaign’ against her, in response to memes being made on her.

Kangana had a strong response to Twitter for suspending her account, "Twitter has only proved my point they are Americans and by birth a white person feels entitled to enslave a brown person, they want to tell you what to think, speak or do, fortunately I have many platforms I can use to raise my voice including my own art in the form of cinema but my heart goes out to the people of this nation who have been tortured, enslaved and censored for thousands of years and still their is no end to the suffering (sic).”

READ | Kangana Ranaut tests positive for COVID-19, calls it 'nothing but a small time flu'

On the professional front, Kangana will next be seen in Thalaivi. The movie, which was set to release in April, had been postponed due to COVID-19.