Late actor Irrfan Khan might not be with us physically, yet his impeccable acting craft will also remain fresh in the hearts of his fans. 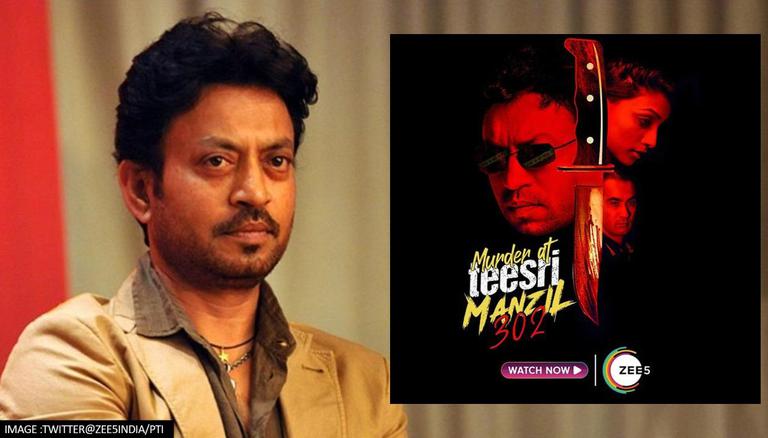 
Late actor Irrfan Khan might not be with us physically, yet his impeccable acting craft will also remain fresh in the hearts of his fans. Fans of the actor can end the year with a triple dose of entertainment, after Irrfan’s unreleased film Murder at Teesri Manzil 302 is all set to release digitally on Zee5 today. Apart from this, the streaming platform will also stream Dinesh Yadav's Waah Zindagi and Turtle on December 31.

The film Murder at Teesri Manzil 302 is directed by Navneet Baj Saini. The film is touted to high on suspense. Starring Irrfan Khan and Ranvir Shorey in lead roles, the film promises to keep you on the edge of your seats. The story revolves around a murder mystery that unfolds with a lot of twists.

The official Twitter handle of the giant streaming company, Zee5 announced the news with the trailer of the film. Irrfan's presence in the film, besides inducing an inevitable twinge, reminds all, if a reminder were at all needed, of the enormity of the loss that his absence represents. The film is dedicated to both Irrfan and music composer Wajid Khan, one half of the Sajid-Wajid duo who died in 2020 two months after the much-loved actor. While sharing the trailer, the streaming platform wrote, “murder. mystery. mayhem. watch the unseen movie of @IrrfanK, #MurderAtTeesriManzil302 on #ZEE5. premieres 31st Dec.”

The film unfolds primarily in two adjoining apartments in a Bangkok building block inhabited by Indians and where everybody speaks Hindi. In fact, the film would have us believe that everybody in the Thai capital uses our Rashtra bBhasha as a means of verbal communication. Fans of the actor could not control their excitement and bombarded the comment section with their happiness. One of the users wrote, “Thanks for the great content.” Another user wrote, “Thank u for releasing a 14 saal purana movie,” while a third user requested the streaming platform to release the Tamil dubbed version of the film.

Meanwhile, earlier, Irrfan’s other unreleased film Song of the Scorpions is also set to release in Indian theatre. The late versatile actor Irrfan Khan plays the role of a camel trader in the film. The story of the movie revolves around twisted love, revenge, and the redemptive power of a song. The Song of Scorpions was planned to be released in early 2021 by Panorama Spotlight along with 70 MM Talkies, but the plans got disrupted due to the second wave of the COVID-19 disease. The film follows Nooran (Farahani), a fiercely independent tribal woman who is learning the ancient healing art of scorpion-singing from her grandmother Zubeidaa (Rehman). According to a myth, if a scorpion bites you, you will die unless a scorpion-singer sings her song and cures you. Irrfan passed away at the age of 53 in Mumbai's Kokilaben Dhirubhai Ambani Hospital on April 29. He had been battling cancer and his health worsened after a colon infection.