‘It Wasn’t Articulated Correctly’: Sabyasachi Mukherjee Apologises After Earning Flak For 'Overdressed And Caked With Make-up Women Are Wounded' Post

'wounded'. The fashion designer conveyed that the post, intended to be a message of love, empathy and to look beyond exterior appearances, wasn’t ‘articulated correctly’ and extended an unconditional apology for the same.

Sabyasachi Mukherjee has apologised after earning flak on social media for his post that stated woman who is 'overdressed', 'caked with make-up' and 'armoured with jewellery' is most likely to be 'wounded'. The fashion designer conveyed that the post, intended to be a message of love, empathy and to look beyond exterior appearances, wasn’t ‘articulated correctly’ and extended an unconditional apology for the same.

Taking to his Instagram story on Saturday, Sabyasachi posted, “I acknowledge the feedback we have received regarding the statements made in our recent Instagram presentation. We hear you and although it was intended as a message of love and empathy and a call to look beyond exterior appearances, it wasn’t articulated correctly. I understand that it does not convey the message appropriately at all and for that, I would like to accept blame and offer an unconditional apology." 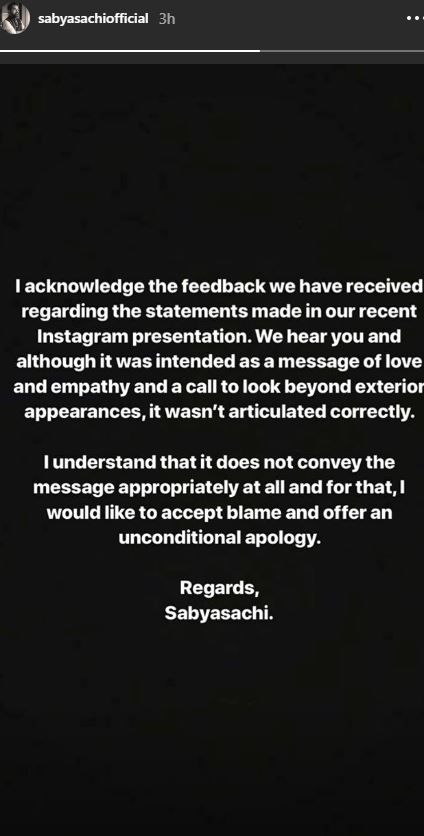 Designer Sabyasachi was criticised after he shared a distasteful post on Instagram where that stated that a woman who is 'overdressed', 'caked with make-up' and 'armoured with jewellery' is most likely to be wounded.

"Bleeding inside, silently holding on to her pride and dignity, shining for the world, though within her innermost being there is a dark, blinding pain. Take some time off to give her your precious company, heal her with your empathy, because sometimes nothing can replace human warmth. Not even the most precious of jewellery", read an excerpt from his post.

A post shared by Sabyasachi Mukherjee (@sabyasachiofficial) on Jul 5, 2019 at 8:10am PDT

The distasteful post did not go down well with many netizens and drew sharp reactions from social media users. One user said, "This is absolute rubbish, please don't associate your brand with such thoughts and judgements", while another user remarked saying, "Please don't make such blank statements".

On the professional front, the designer was in the news for designing Priyanka Chopra's saree for brother-in-law Joe Jonas and Sophie Turner's wedding.