'I’ve Been Trying For So Long, It’s Been So Many Years...,' Disha Patani Breaks Her Silence On Relationship With Tiger Shroff. Here's What She Said

While the speculation of their romance has been in the air for quite a while now, the two have never admitted to any of the rumours on record.

Disha Patani and Tiger Shroff's relationship has been under the spotlight for way too long now and none of them have gone on record to confess anything. Every dinner outing of theirs further fuels speculations of them being a couple.

Disha who will now be seen in Salman Khan's 'Bharat' recently spoke about Tiger in one of the promotion interviews. Disha answered a question asked by a Twitter user, “Why don’t you both accept your relationship? People love you both as a couple.”

She further said: "Now I’ve done this film Bharat where I’m doing all these stunts and I thought maybe he’ll get impressed but no luck. Yeah, we go to eat but that doesn’t mean he’s impressed, not like that like the crush impressed; but he likes everybody’s pictures like that. You must speak to him the next time. He’s shy and I’m shy so nobody’s breaking the ice."

After keeping their rumoured relationship under the wraps and maintaining their 'just friends' tag for a long while, Disha and Tiger made it official on Valentine's Day.

While the speculation of their romance has been in the air for quite a while now, the two have never admitted to any of the rumours on record. However, the two have pushed social media into frenzy with their latest  Instagram post.

Tiger Shroff wrote: "Turns out I'm taken," the caption read. The post included a picture in which Tiger Shroff can be seen kissing a ring on his index finger. Disha Patani too posted a similar picture flaunting her ring on the index finger with the caption, 'Someone popped the question and I said yes." 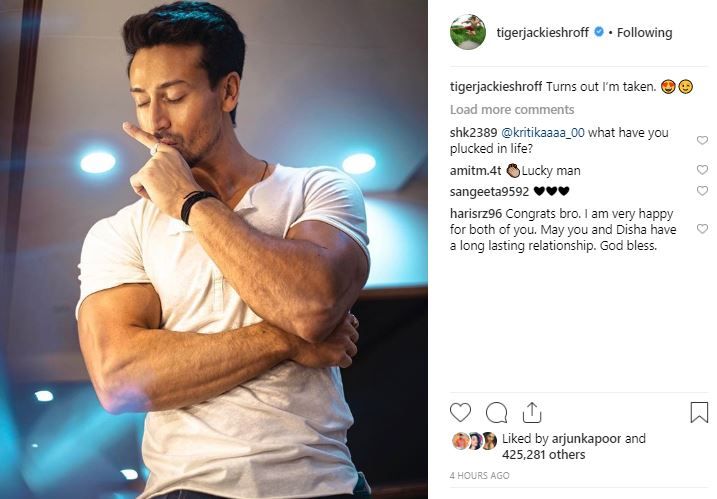 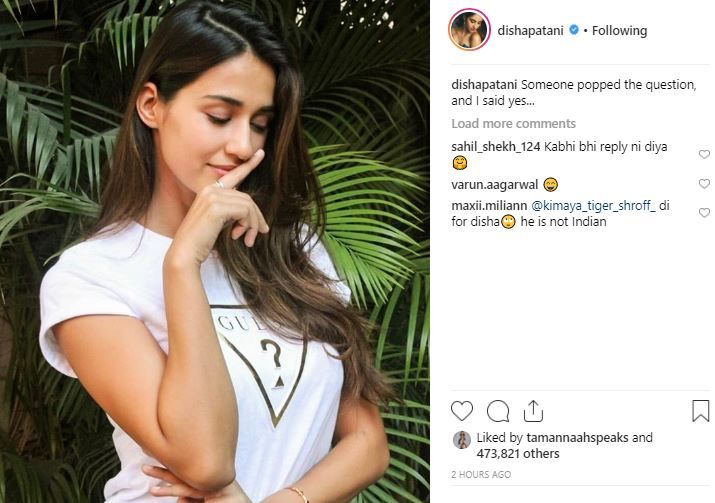 While fans wondered if they got engaged, it should be noted that the rings they are wearing are on index fingers and not on their ring fingers, which might mean it is a promise ring.

On the professional front, Disha will be seen romancing Salman Khan in 'Bharat'. The film is slated to release on June 5.