Janhvi Kapoor's BFFs You Must Know About; Check Full Details

Janhvi Kapoor is one of the most popular Bollywood celebrities on social media. Read on to know more about the actor's BFFs.

Bollywood celebs are quite active on social media and keep their fans updated at all times. Janhvi Kapoor, the newbie in the industry, has a massive following on her social media handles. She is known among her followers for her unique fashion sense and the numerous intriguing posts she shares. She has shared several intriguing posts, keeping her fans engaged and entertained. Her fans are very excited about every single facet of her life. With all that said now, read on to know more details about actor Jhanvi Kapoor and her Bffs.

Actor Jahnvi Kapoor and Alaviaa Jaaferi, daughter of iconic Bollywood actor Javed Jaffrey, are very close friends. The duo keeps sharing their pictures on Instagram. Their bond is widely known among fans. They both are seen posing beautifully in these images. Their friendship is also widely popular among their fans. Take a look at the pic: 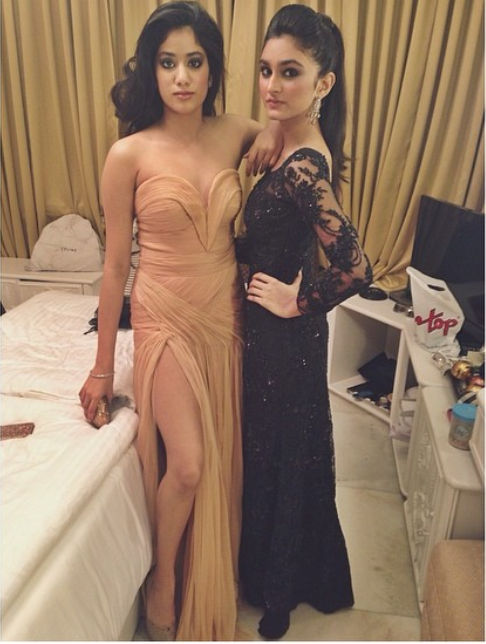 Both the young stars were part of the film, Dhadak. Reportedly, they got along well and they share a special bond. The two also share wonderful chemistry. Check out this video that features the two of them:

On the work front, the Dhadak actor Janhvi Kapoor was last seen in the Netflix original anthological film called Ghost Stories where her performance was much loved. She has an array of films releasing this year starting with Gunjan Saxena, Dostana 2, and Roohi Afzana. She will also star in films like Bombay Girl, Valimai, Unmaadhiand, and Takht. The Dharma Productions' film Takht will feature an ensemble cast of Ranveer Singh, Vicky Kaushal, Bhumi Pednekar and Kareena Kapoor Khan. With her recent performances in Bollywood movies, Janhvi Kapoor has gone one to be regarded as one of the rising stars in Hindi cinema.

PEOPLE HAVE PLEDGED SO FAR
LATEST NEWS
View all
3 hours ago
Ileana d'cruz shows how she is 'avoiding people' with a stunning underwater picture
3 hours ago
Esha gupta had sent house help on leave before lockdown, says 'relieved she’s with family'
4 hours ago
Siddhant chaturvedi's reply to a comment on his instagram post wins the internet
3 hours ago
When priyanka chopra was accused of abusing a doctor in ugly in-flight argument; read here
6 hours ago
Riteish deshmukh thanks lata mangeshkar, says 'my father had great respect for you'