'Dhadak' actor Janhvi Kapoor is a favourite among the paparazzi as she is often spotted out and about in the city.Her post-gym photos have always been popular.

Dhadak actor Janhvi Kapoor is considered one of the most promising female actors from the current generation and she has a lineup of really interesting films for the future. Janhvi has time and again proven her mettle as a social media influencer as well with her Instagram updates about anything and everything in her life. The actor is also a favourite among the paparazzi as she is often spotted in and around the city for her work or leisure.

Read | Janhvi Kapoor gets a piggyback ride due to 'busy lifts', see pictures

Known for her social media presence and often for the hilarious inside pictures and witty captions, Janhvi Kapoor recently posted a goofy photo of herself from her gym session. The actor can be seen posing in black sportswear and a pair of blue shorts as she paints a picture of a fun day at the gym. She captioned her update with the words 'spa day at @namratapurohit's Pilates studio' where she can be seen with a mud mask smeared on her face along with a wide grin. 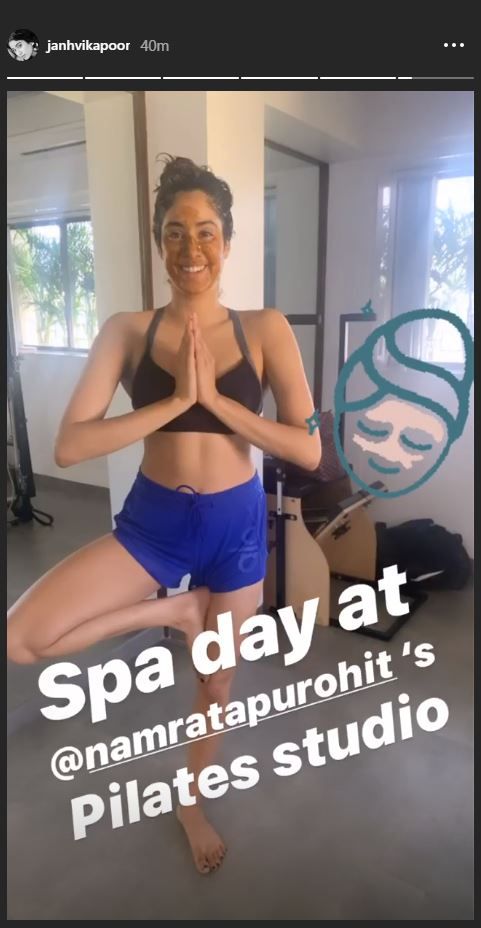 Read | 'Who would you Kill, Marry & Date?': Janhvi Kapoor answers the question

Janhvi Kapoor had also been spotted leaving from her gym. Take a look:

What's next for Janhvi Kapoor?

Janhvi Kapoor featured last in a horror anthology film Ghost Stories, in director Zoya Akhtar's segment, which released on the digital platform on January 1. Her solo film Gunjan Saxena: The Kargil Girl featuring Pankaj Tripathi and Angad Bedi is scheduled to release on March 13. The Dhadak actor will also be seen in Hardik Mehta's horror-comedy Roohi Afzana along with Stree actor Rajkummar Rao. The film is currently in the post-production phase and is likely to release on April 17, 2020. Janhvi Kapoor is currently filming for Colin D'Cunha's Dostana 2 along with Luka Chhupi actor Kartik Aaryan and newcomer Lakshya.