On the 9th day of the auspicious festival of Navratri, actor Kangana Ranaut took to Instagram and shared her picture while performing the puja. Take a look - 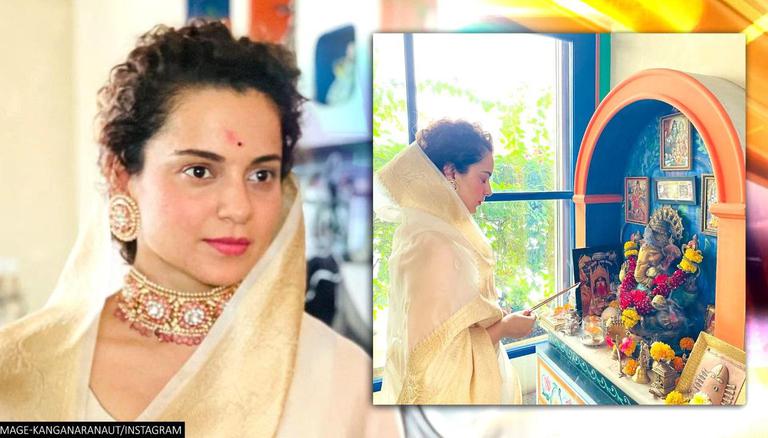 In the picture, looking ethereal in a white traditional saree with her dupatta on her forehead, the Manikarnika actor looked a sight to behold and left her fans in awe. She extended her good wishes and greetings to all while giving a peep into the Maha Navami celebrations. While captioning the post, she wrote, “Maha Navami ki Hardik Shubhkamnaen".

For the unversed, the ninth day of Navratri is also dedicated to Goddess Siddhidatri who is a form of Shakti who is worshiped among the Nav Durgas. The nine-day festival of Navratri is dedicated to the nine forms of Goddess Durga which include Shailputri, Brahmacharini, Chandraghanta, Kushmanda, Skanda Mata, Katyayani, Kalratri, Mahagauri, and Siddhidatri. Meanwhile, on the work front, the actor has been receiving terrific reviews for her latest release Thalaivii which traces the life of former Tamil Nadu CM J Jayalalithaa right from the young age of 16 to her entry into the world of politics. She also recently wrapped up the shooting of her next film Tejas where she will be seen playing the role of an Air Force pilot.

She will also be seen in Dhaakad with Arjun Rampal and Divya Dutta. She is also producing an OTT film Tiku Weds Sheru with Nawazuddin Siddiqui in the lead. She even met the Sacred Games actor at her Bandra office to discuss the film.  While sharing the picture, Kangana wrote, “Guess who is in the house …My most favourite @nawazuddin._siddiqui. P.S always forget to click picture with him thank you @silk.sp for this surprise picture…"[sic]. Apart from this, she will also be seen playing the role of Sita in The Incarnation: Sita and will also step into the shoes of Indira Gandhi for an upcoming project.