Kangana Ranaut Shares Her Journey From 'Thalaivi' To 'Dhaakad,' Thanks 'genius' Minds

Actress Kangana Ranaut who is currently busy shooting for her upcoming film Dhaakad in Budapest recently took to Instagram and documented her journey. 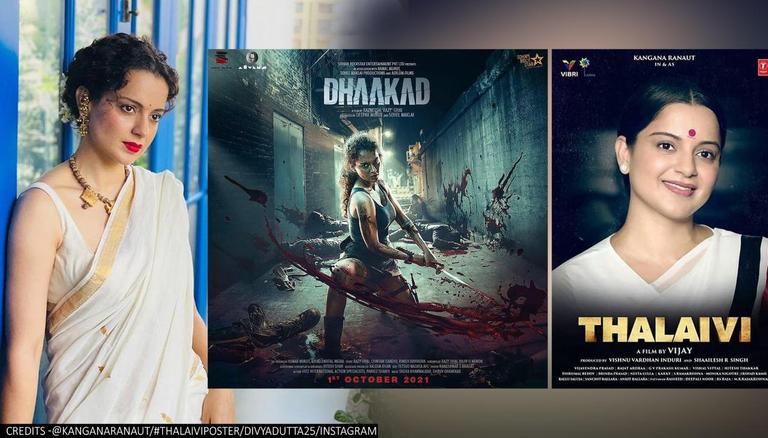 
Actress Kangana Ranaut who is currently busy shooting for her upcoming film Dhaakad in Budapest, recently took to her Instagram handle and documented her transformational journey -- from going chubby for her role in Thalaivi to going back to a fit body for her role in Dhakaad. Thalaivi is the forthcoming political drama of the actor where she will be seen playing the role of the former late Tamil Nadu Chief Minister, J Jayalalithaa. On the other hand in Dhaakad, Kangana will be seen playing the role of an agent called Agni.

While preparing for her role in Thalaivi, Kangana had to gain around 20 kgs to get herself close to Jayalalitha's depiction. Soon after she completed the shooting, she worked day and night on her body to reduce the extra kilos that she gained over time for in order to suit her other two releases, Tejas and Dhaakad. Now with Dhaakad, Kangana will be seen performing high-octane action sequences and blaze guns at the enemy. She will be seen playing the role of an agent Agni and her first look from the film looks quite impressive.

She shared two stills, one from Thalaivi and the other from Dhaakad as she documented her transformational journey. “Journey like no other …#Thalaivi #Dhaakad. Special mention to two visionaries and geniuses @neeta_lulla @mrsheetalsharma,” she captioned the post. Reportedly, Dhaakad is based on issues such as crimes against women and child trafficking. Kangana, who will play the role of an agent in the film, was recently seen rehearsing one of her fight sequences. She shared a glimpse of her sequence via social media. The actor previously shared a video practicing one of her fight sequences from the film with two of her trainers. In the video, she wrote, "Ladaaku Number one...Baaghi ladki #Dhaakad rehearsals." The film is scheduled to release by October this year. It is being helmed by Razneesh Ghai who will be debuting in this industry with this film. The film casts Kangana Ranaut in the lead role. Other supporting roles are played by Arjun Rampal and Divya Dutta. Apart from Dhaakad, Kangana has begun shooting for an untitled film based on the life of former Prime Minister of India, Indira Gandhi.