Kangana Ranaut's 'Thalaivii' was reviewed by Arjun Rampal with 'no spoilers' while CBFC chairman Prasoon Joshi also tweeted for the Jayalalitha biopic. 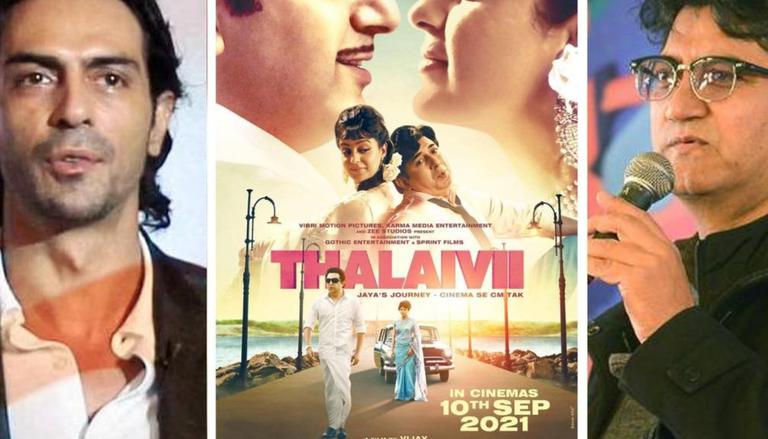 
Thalaivii's release might have been delayed due to the COVID-19 pandemic, but the impact that makers intend through the story seems very much intact. If the initial opinions around the Kangana Ranaut-starrer are anything to go by, the movie promises to work its magic on viewers.

A proof of this was Arjun Rampal and Prasoon Joshi's review of the Jayalalithaa biopic, according to which the movie is 'phenomenal' and 'genuine piece of work'. Take a look at the celebrities' reactions to the film.

Arjun and Kangana recently collaborated on the movie Dhaakad. And their equation seems to have grown from just being co-stars, as the latter showed her latest release to the Rock On!! star.

He took to social media to term the movie as 'phenomenal'. The actor stated that it was a 'difficult film' to make, but gave credit to director AL Vijay for handling it 'wonderfully'. He gave a special mention to the cast, calling them 'excellent'.

For Arvind Swami, who plays the role of late actor-turned-Tamil Nadu Chief Minister MG Ramachandran, Arjun's used the term 'brilliant'. Arjun praised Kangana as 'incredible' for giving it all with the movie and added, 'what a performance she has given'.

Without giving out any spoilers, he urged his followers to watch the movie in theatres, as the film industry sought to regain audiences amid the COVID-19 pandemic.

Among the other celebrities to give a shoutout to Thalaivii was lyricist-writer Prasoon Joshi. The Central Board of Film Certification chairman, who collaborated with Kangana in Manikarnika, called the performance by Kangana as 'authentic', 'intense', 'graceful' and 'powerful'. He highlighted that the 4-time National Award winner 'truly tapped into her inherent core energies'.

He hailed Arvind as 'brilliant' and pointed out that he had added layers. Joshi praised the makers, director Vijay, screenwriter Vijayendra Prasad for the 'genuine piece of work' and gave them his best wishes.

Authentic intense and graceful What a powerful performance by Kangana in #Thalaivi ,she truly tapped into her inherent core energies. Arvind was brilliant and added layers . A genuine piece of work by Vijay,Vijendra prasad ji and the team. Best wishes.

Among the others to praise Kangana were her own parents, who predicted that he will win her fifth National Award with this film.

Previously, other celebrities like Samantha Akkineni had given their best wishes to the film ahead of its release.

Thalaivii hits theatres on  September 10 and will release in Hindi, Tamil, Telugu languages, though audiences in some states like Maharashtra will still have to wait for screens to open.