Actress Kareena Kapoor recently took to Instagram and shared a throwback picture from the '80s with mother Babita and sister Karisma on Instagram. 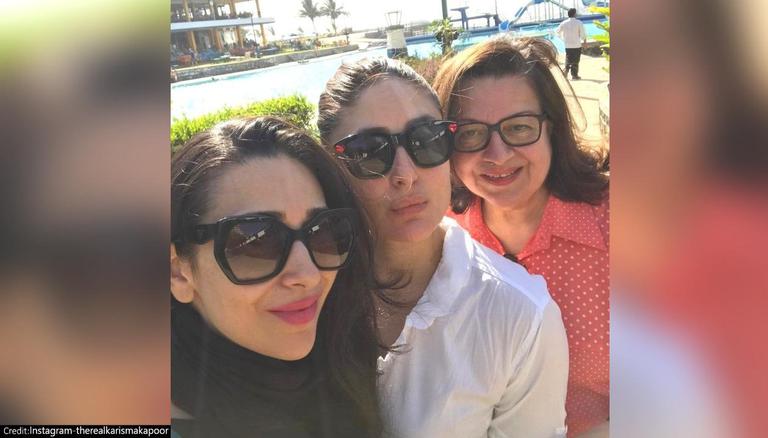 
Jab We Met actor Kareena Kapoor is looking forward to release of her book on pregnancy, and is promoting it on her social media. She took to her Instagram handle and treated fans with a throwback picture of herself. She took a stroll down memory lane and shared a picture from the 1980s with her sister-actor Karisma Kapoor along with mother Babita from one of their Christmas gatherings.

In the picture, a young Kareena can be seen clinging to mother Babita while posing. Karisma Kapoor looked beautiful in a white suit while holding her mother’s arms and poising for the camera. Due to the lockdown, since there are no gatherings and events taking place, they asked about the onset of Christmas. Calling herself and sister Karisma as ‘mammas girls’ she wrote, “Is it Christmas already?#mammas girls #these outfits are awesome #the80s @therealkarismakapoor.”

Kareena’s sister-in-law Saba Ali Khan was the first one to comment below and wrote, “Mahshallah” along with a heart emoji. Teh actor recently unveiled her book on pregnancy Kareena Kapoor Khan’s Pregnancy Bible, where she has revealed numerous details regarding her journey of motherhood. Kareena announced her book on July 9. Right from some pictures of sons Taimur and Jeh to ‘fainting out of exhaustion’ during her pregnancy, many revelations in the book have gone viral.

The Chameli actor took to her Instagram to share glimpses into her new book including an ultrasound image of her baby. Earlier, she shared a lengthy post and wrote about her excitement of sharing her moments and memories with her fans. In the caption, she stated how she could not believe that she actually agreed to write this book and added, “We all have our own unique experiences as expectant mothers, but there are some similarities and with this book, I’m sharing my experiences and learnings, and hope that in some way this will help you on your journey towards motherhood.”

READ | 'Fainted out of exhaustion': Kareena Kapoor opens on difficulties during second pregnancy

Speaking about her experience with her babies, she added, “Carrying both my babies have been the most special time in my life, and I am excited to share the moments and memories with you”. Further, she even gave a huge shout-out to her lovely co-writer, Aditi Shah Bhimjyani for “doing such a stellar job” and also “Rohan Shreshtha for not only shooting the book but for also capturing my little baby's first-ever photo”.