Kareena Kapoor Khan Shares Stunning Mid-workout Selfie, Writes 'get Up And Move It'

Kareena Kapoor Khan took to her Instagram handle earlier today and shared a picture of herself mid-workout. Read on to know more about her latest post.


Kareena Kapoor Khan is back to her fitness regime after giving birth to her baby boy in February, earlier this year. The Kabhi Khushi Kabhie Gham actor took to her Instagram handle and shared a picture of herself mid-workout and added a quirky caption with it. Here is everything you need to know about Kareena Kapoor's workout pictures and more.

The Veere Di Wedding star took to her Instagram handle earlier today, on April 8, 2021, and posted a mid-workout selfie. The actor kept her hair open and could be seen lying down on the floor, wearing Puma workout gear. Her caption read, "Get up and move it move it ðŸ‘¯‍â™€ï¸ðŸ‘¯‍â™€ï¸ðŸƒ‍â™€ï¸ðŸƒ‍â™€ï¸ðŸ™ŒðŸ»." Kareena even tagged Puma India in her latest IG post.

This is not the first time after her second delivery that Kareena Kapoor has posted a workout selfie. She frequently shares fitness inspiration posts on social media and urges her fans to work out regularly. The Bollywood star has a following of 6.3 million people on Instagram and her latest picture garnered around 250k likes within a couple of hours. Puma India also commented on her picture saying, "We like to....MOVE IT! ðŸ™Œ", while her fans gushed over her no make-up look and called her beautiful.

READ | Amrita Arora says 'take us back' as she digs out old pics with Kareena, Malaika & gang 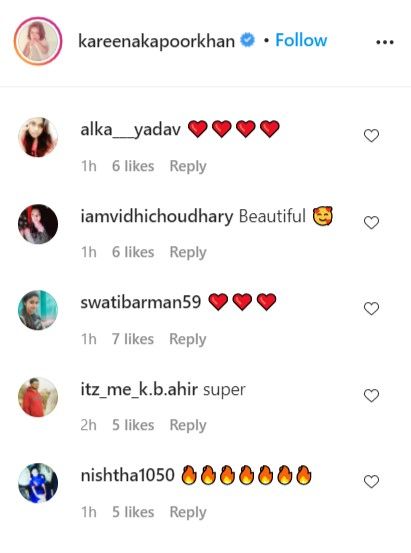 Kareena Kapoor Khan shared her newborn baby's first glimpse on the occasion of International Women's Day. The black and white picture that the Veere Di Wedding star shared had her looking at the camera while her son's head rests on her shoulder. Kareena and Saif Ali Khan are yet to reveal their son’s picture and name. Through this post, Kareena Kapoor wished all the women on the special occasion too. Her caption read, "There’s nothing women can’t do â¤ï¸â¤ï¸ Happy Women’s Day my loves â¤ï¸."

Kareena Kapoor Khan is back to work a month after the delivery of her second child. The actor is currently hosting a radio show titled What Women Want and will soon be seen in the upcoming film titled Lal Singh Chaddha. The movie has been in the production stage for quite some time and many fans have been waiting for its release. Khan's last on-screen appearances were in Good Newzz and Veere Di Wedding, which hit screens in the year 2019.