Kareena Kapoor recently took to her Instagram handle to share a photo of Jeh's Yoga pose and said "Yoga runs in the family." Karisma Kapoor called him 'jaan.' 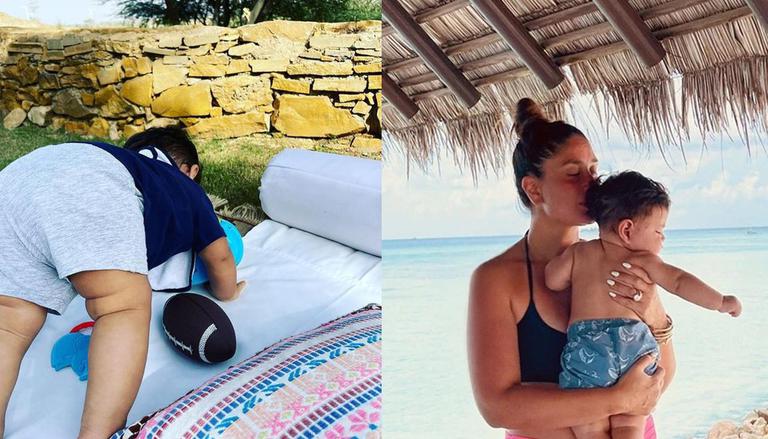 
Kareena Kapoor Khan is very particular about her daily workouts. The actor often posts photos of her Yoga sessions. On the other hand, Saif Ali Khan is also often seen performing Yoga with his son Taimur. Amid the Yoga loving family, Saif and Kareena's youngest son Jehangir Ali Khan has also already started taking part in the exercise routine. Kareena Kapoor recently shared a photo of Jeh's Yoga pose and said, "Yoga runs in the family."

Kareena Kapoor Khan recently took to her Instagram handle to share a picture of Jeh's Yoga pose. In the photo, Jeh was wearing a blue t-shirt and grey shorts. He was standing on his hands and legs on a white mattress in an outdoor setting. He also had some of his toys lying around. Sharing the photo in which Jeh's face was not visible, Kareena wrote, "Downward Dog. Yoga runs in the family you see. 8 months Pike position[sic]." Bebo also called Jeh "Mera Beta." Fans and friends showered Jeh with love through the comment section. Karisma Kapoor reacted to the photo and wrote, "our Jaan[sic]," along with some red heart emojis. Jeh's aunt Saba Ali Khan sent him a hug through the comment section.

Kareena Kapoor on Jeh's half birthday

Kareena Kapoor and Saif Ali Khan welcomed Jeh in February this year. The couple is also parents to their five-year-old son Taimur. As Jeh turned six months old in August, Kareena shared a photo of her holding Jeh in her arms on a beach. She was seen kissing Jeh on his head. Sharing the photo, Kareena wished Jeh love, happiness and courage. She wrote, "Love, happiness, and courage to you always. Happy 6 months my life[sic]."

READ | Arjun Kapoor asks Kareena to turn photographer for him; "block your dates for photoshoots"

After not revealing Jeh's photo for months, Kareena Kapoor now often shares his pictures. Earlier this month, she shared an adorable photo of Jeh, in which his chubby cheeks, hands and legs were visible. Sharing the photo, Kareena wrote, "My life, your cheeks and cuddles complete me[sic]." Several celebs reacted to the photo. Sonam Kapoor commented, "so adorable[sic]."

On the work front, Kareena Kapoor will next be seen in Laal Singh Chaddha. The actor with share the screen space with Aamir Khan in this Advait Chandan helmer. It is the official Hindi remake of Tom Hanks award-winning film Forrest Gump.