Bollywood actor Karisma Kapoor took to her Instagram handle and shared a lovely picture of herself along with a relatable, funny question through the caption.

Karishma Kapoor's latest Instagram post is extremely relatable for all her fans and followers who have been forced to stay indoors due to the lockdown imposed by the government to curb the rising numbers of the coronavirus cases in the country. She asked "Is it really Saturday?" as she shared a bright selfie where her eyes stand out brilliantly. Her fans have liked the post and commented with hearts for the beautiful pic.

A few of Karisma's friends from the industry have replied with some interesting comments on her post. Balaji Telefilms head Ekta Kapoor wrote a hilarious comment as she said, "It's Tuesday! Trust me" while celebrity nutritionist Rujuta Diwekar and Sonam Kapoor's sister Rhea Kapoor complimented her looks in the selfie. 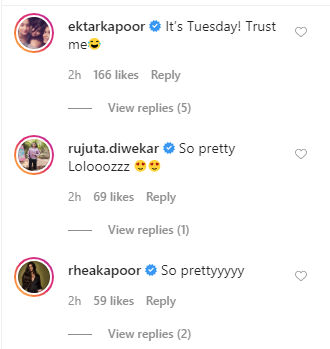 Karisma Kapoor had shared a still from one of her films with Khiladi actor Akshay Kumar and recalled her glorious days from the 90s. In the photo, Karisma and Akshay can be seen twinning in black and white outfits while their enthusiasm level is at max. She wrote in the caption, "I have no recollection which film, when or where this pic was taken! But it has a great energy ðŸ˜Ž @akshaykumar those were the days! #90s #flashbackfriday".

Earlier last week, Karisma Kapoor had also shared a beautiful quote filled with positivity. The post read, "Just so you know, nobody else has it all figured out either. We are all just making it up as we go along!" Fans in huge numbers flooded the comments section with love. While one fan said, "This is so true", another one wrote, "Thank you for sharing this."

Read | Karisma Kapoor shares post on 'positivity', fans say 'This is so true'

PEOPLE HAVE PLEDGED SO FAR
LATEST NEWS
View all
5 mins ago
Sonu Sood posts a video to educate people about new ways of greeting and meeting
26 mins ago
Cyclone Nisarga: Madhuri Dixit asks fans to refrain from spreading misinformation
2 mins ago
Taapsee Pannu or Rakul Preet Singh might essay Karnam Malleswari in her biopic?
1 hour ago
Madhuri Dixit celebrates 25 years of 'Raja' with throwback pictures from the shoot
22 mins ago
Amitabh Bachchan's movies with Manoj Bajpayee; From 'Aks' to 'Sarkar 3'