Karisma Kapoor recently shared a stunning picture as she enjoyed the sunny vibe on her balcony. Have a look at the picture with all details here. Read ahead.


Bollywood actor Karisma Kapoor recently took to social media to share an adorable picture of herself from the balcony of her house. In the picture shared, she is seen relaxing in the sun while enjoying a cup of hot beverage with a bright smile across her face. The actor has also advised her fans to stay at home to curb the second wave of COVID-19, through the short caption for the post. Her fans have flooded the comments section with compliments as they love the picture and also agree with her thoughts.

Bollywood actor Karisma Kapoor recently took to Instagram to update her fans on what she has been up to lately. The actor shared a sweet picture on her feed where she is seen sipping on some tea while wearing a bright smile across her face. She is seen posing for the fake candid while looking at the cup of tea in her hands. Karisma Kapoor is also seen enjoying the sun on her balcony while a fancy teapot rests on the table next to her.

In the picture posted, Karisma Kapoor can be seen dressed in a simple floral outfit that has been studded with varied colours. The pyjama suit comes with a pair of shorts and a simple button-up shirt which has half sleeves. It has been covered in white and red floral prints which stand in contrast with the dark blue background. In accessories, Karisma Kapoor is seen wearing a pair of thick-framed glasses and a simple smartwatch, which is a trendy piece of accessory these days.

In the caption for the post, Karisma Kapoor has asked her followers to stay at home. She has also indicated that she is trying to stay positive even in such difficult times. She believes that the current situation will also pass and has hence mentioned the famous quote, ‘We Shall Overcome’. Have a look at the post on Karisma Kapoor’s Instagram here.

In the comments section, various people have complimented the actor’s look in the picture. A few people have also used a series of emoticons to express their thoughts. Have a look at the post on Karisma Kapoor’s Instagram here. 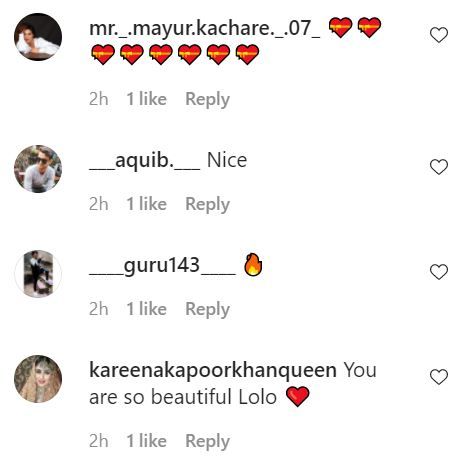