Actor Kartik Aaryan took to his Instagram on Sunday and shared an old throwback picture of himself with a kitty. He was caught in a candid moment while posing with the animal on the road. Sharing the same, he wrote, “Waiting for my Report.” He also took to his Instagram stories to share a selfie and wrote, "Report aarai hai thode time mein. Kya lagta hai?" (My report will be here in some time. What do you think?). He asked his fans to vote whether he will be positive again or negative. So far, 72% of his fans think he will test negative.

Replying to Kartik Aaryan's Kartik Aaryan's health update post, a user wrote in Hindi, "It will come negative only, don't worry." As soon as the Luka Chuppi actor stumbled upon the same, he replied with joined hands emojis. Many simply flooded the comments section and requested him to stay calm about his reports. A fan wrote, "It'll be negative only, nothing to worry about." The news of Kartik Aaryan COVID-19 positive was shared by the actor himself on March 22. Ever since then, he has been in quarantine and has been sharing many old pics from the archives. 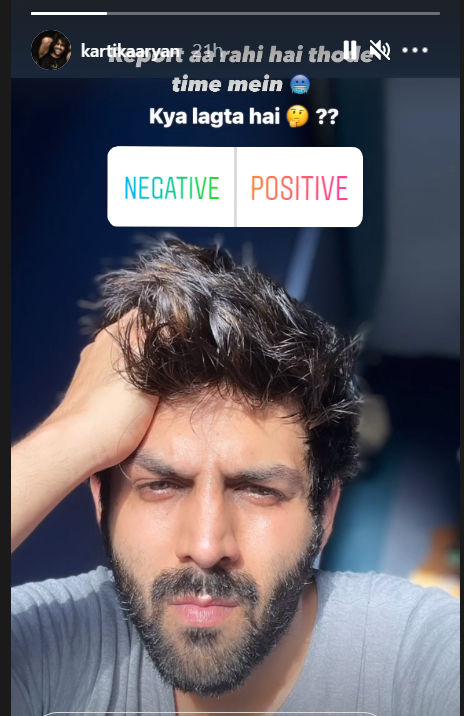 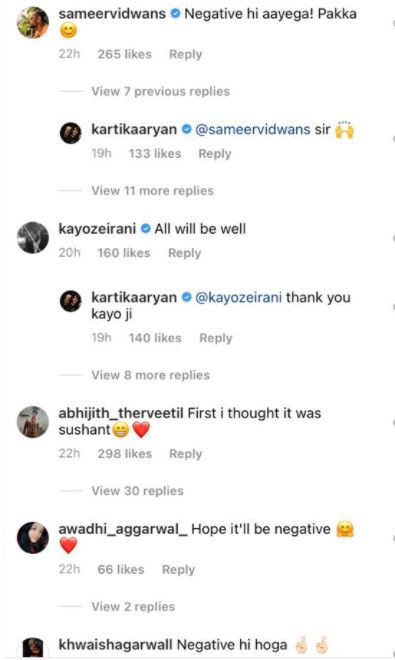 Meanwhile, on Saturday, the Pati Patni Aur Woh actor shared an old throwback picture of himself from the sets of his 2011 film, Pyaar Ka Punchnama, helmed by Luv Ranjan. The B&W picture featured Kartik and Rahul Mody. The duo was caught while having fun on the road. Sharing the same, he wrote, “Bangkok jaate hi body language kuchh badal si jaati hai, Punchnama Days.” (The moment you go to Bangkok, the body language kind of starts changing). Earlier, he shared another picture of himself while performing a headstand on his terrace and through his comments, he revealed that he binge-watched Kumkum Bhagya at home. Kartik Aaryan's photos garnered many comments from fans.

On the work front, Kartik Aaryan was last seen in Love Aaj Kal, helmed by Imtiaz Ali. He has a slew of movies lined up. He will be also seen in the upcoming movie, Dhamaka, directed by Ram Madhvani. The teaser of the same garnered massive love from the audience. Apart from this, he has Dostana 2, alongside Janhvi Kapoor, a sequel to the 2008 hit of the same name. He was also shooting for Bhool Bhulaiyaa 2, opposite Kiara Advani and Tabu.