Ahead of its release, 'Kaun Banegi Shikharwati' stars Soha Ali Khan, Lara Dutta invited fans to a trivia about guessing their characters. Take a look. 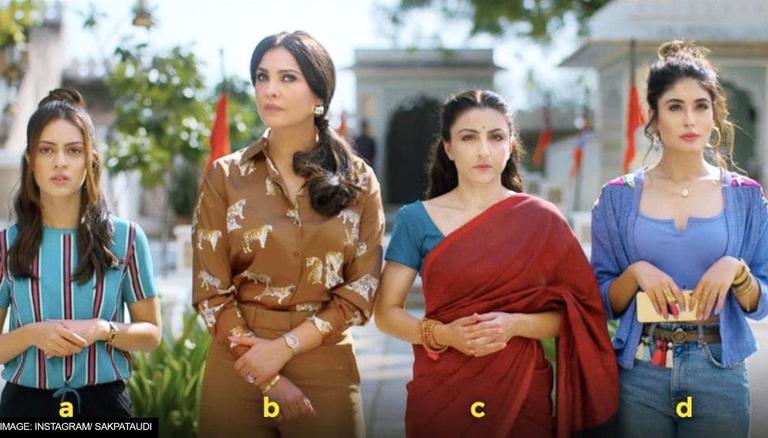 
Soha Ali Khan and Lara Dutta are all set to come together for the web series Kaun Banegi Shikharwati, which is gearing up for a January 2022 release. Shortly after releasing its trailer, the actors have put forth an interesting trivia in front of their fans, asking them to recognise their characters via a childhood image. Their latest Instagram posts showcase a then and now glimpse of the four leading ladies (including Kritika Kamra and Anya Singh), with Soha and Lara asking their followers to spot their characters Rajkumari Gayatri and Rajkumari Devyani in their yesteryear avatars.

Helmed by Gauravv K Chawla, the web series also stars Naseeruddin Shah, Cyrus Sahukar and Raghubir Yadav in pivotal roles. It revolves around a dysfunctional family whose four daughters despise each other, however, they're forced to come together upon a letter by their father Raja Mrityunjay (Shah). Chaos and laughter ensue as they try to stay afloat under the same roof.

Taking to her Instagram handle on Sunday, December 26, the Bell Bottom star posted the picture showcasing the princesses' present-day avatars as opposed to their childhood glimpse. For the caption, she wrote, "Guess which one is me, Rajkumari Devyani as a kid? Comment below." Soha also asked about her character in the same manner. Take a look.

Fans quickly spotted who's who and quipped that Lara was the first girl from the left, while many noted that Soha is the third one from the left. Soha further teased fans by commenting, "One with the plaited hair? No 3?".

The recently released trailer of the show revealed its plot, where Raja Mrityunjay wants to save his palace Shikharwati and gives this duty to his four daughters. He pens a letter to all his daughters and somehow they agree to come to the palace. The clip then shows the rivalry among all four, where they refuse to speak with each other. In the quest for winning over the kingdom, they must display their talents and this rat race further intensifies to a level that the tasks change into a war. The show will premiere on January 7 via OTT platform ZEE5.