Kiara Advani Reveals Her Plans For Summer 2020, And It Comes With A 'BeeGees' Twist

Kiara Advani has revealed her plans for the summer of 2020. It is not what you think. Read to know Kiara Advani's plan for summer 2020

Kiara Advani is known for her smashing performances in several Bollywood films. Being quite active on social media, Kiara Advani took to her Instagram account to share what are her plans for the summer of 2020 were. Fans might think that Kiara Advani might be planning a vacation to some exotic location, but that is not true. Kiara Advani's summer plan is to stay alive.

Due to the Coronavirus pandemic, many celebrities have been staying indoors to prevent the spread of the virus. The deadly Coronavirus has claimed many lives so far and Kiara Advani's summer plan is all about 'staying alive'. Sharing the meme, Kiara Advani shared the short part of the song Stayin' Alive by Bee Gees on her Instagram story.

Kiara's Instagram story is about a meme asking "What is your plan this summer, replying to which the song Slayin' Alive stats playing. Here is a look at the snip of Kiara Advani's Instagram story. 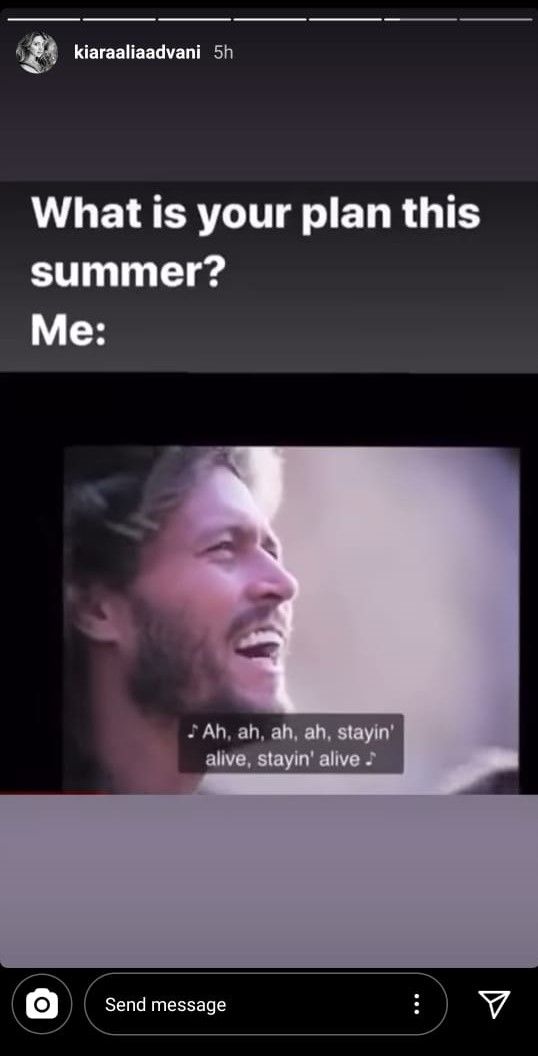 On the work front, Kiara Advani has a number of exciting projects lined up. Kiara Advani was last seen in the Netflix film Guilty. The film was highly appreciated by the audience. Fans have also appreciated Kiara Advani's versatility as an actor. Kiara Advani will be seen sharing the screen space with Akshay Kumar next, who is reportedly Kiara Advani's favourite co-star and her mentor in the film Laxmmi Bomb. The comedy horror film is the remake of the Tamil film Muni 2: Kanchana.

Also Read: Kiara Advani And Other Bollywood Divas Show Off Their Love For Skirts; See Pics