Kiara Advani took to Instagram to upload a story to welcome co-star Tabu who returned for the shooting of her upcoming comedy-horror 'Bhool Bhulaiyaa 2'.

Kiara Advani and Kartik Aryan are currently busy shooting for their upcoming comedy horror film Bhool Bhulaiyaa 2 which will be released in November of this month. The 28-year-old actress took to Instagram to share the exciting news of one of their cast member returning to the sets of Bhool Bhulaiyaa 2. Along with Kiara, Kartik also took this opportunity to welcome the actress with a funny caption on Instagram.

Kiara posted an Instagram story where the Bhool Bhulaiyaa 2 cast can be seen talking a selfie together. Captioning on the story, Kiara wrote 'Welcome back Tabu, Bhool Bhulaiyaa 2 fam is now complete'. Tagging her co-stars and the director of the film Anees Bazmee, Kiara added heart emojis in her story. Kiara had taken to Instagram earlier to announce the release date of her upcoming movie with Kartik Aryan by sharing a sweet picture of them. 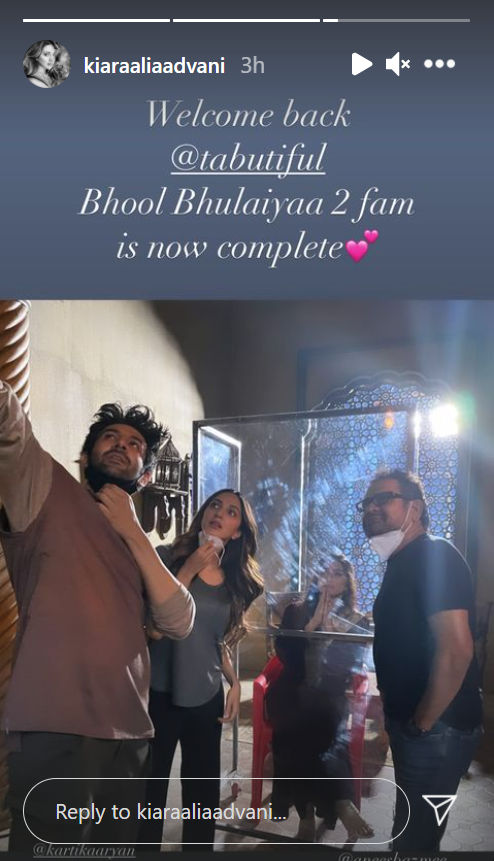 The 30-year-old was not far behind in welcoming his co-star as he posted a selfie on his Instagram. In the selfie clicked by Kartik, Kiara and Anees are all smiles while Tabu can be seen posing with her hands joined while sitting in a plastic bubble. According to Kartik's caption, Tabu brought her own portable Z ++ Bio-Bubble to shoot on the sets of Bhool Bhulaiyaa 2.

Directed by Anees Bazmee, Bhool Bhulaiyaa 2 is the sequel to Priyadarshan's Bhool Bhulaiyaa starring Akshay Kumar and Vidya Balan. The movie, starring Kiara Advani and Kartik Aryan, will be released on November 19 this year. Along with its main cast, Tabu will also play an important role of Veenita Tripathi in the movie.

A look at Kiara Advani's movies

The young actress made her Bollywood debut in the movie Fugly released in 2014. Her next film MS Dhoni: The Untold Story in 2016 helped her receive recognition among the Indian audience after which she went on to star in Bharat Ane Nenu in 2018 in Telugu. Kiara rose to prominence through her role in Kabir Singh opposite Shahid Kapoor and Good Newwz in 2019 alongside Akshay Kumar and Kareena Kapoor Khan.