Kiara Advani dropped a series of posters of 'Govinda Naam Mera'. As soon as the posters were up, her 'Kabir Singh' co-star Shahid Kapoor praised the actor. 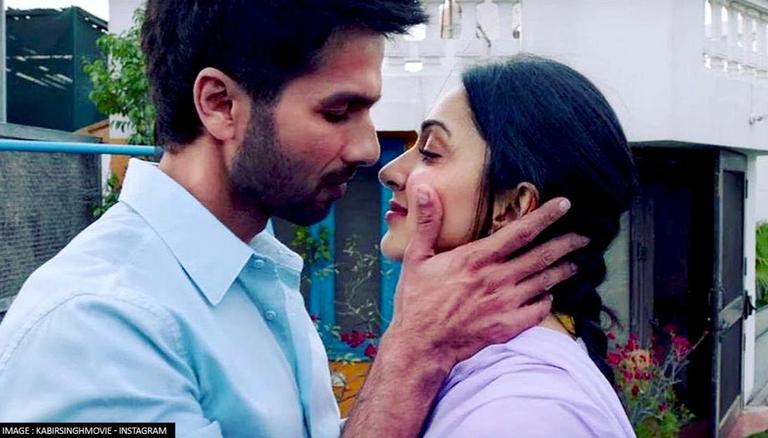 
Bollywood actor Kiara Advani recently took to her verified Instagram handle and unveiled the first look posters of her highly-anticipated film titled Govinda Naam Mera. The film also features Sardar Uddham star Vicky Kaushal and Durgamati fame Bhumi Pednekar in the lead roles. Kiara dropped a series of posters giving a glimpse of each character in the film. As soon as the posters were up, her Kabir Singh co-star Shahid Kapoor was quick enough to praise the actor for her new project.

Taking to the photo-sharing site, Kiara Advani unveiled the first look of her character from Govinda Naam Mera. In the film, she will be seen as Govinda's 'naughty' girlfriend. In the first-look poster, the actor looked stunning in a vivid yellow saree and a strappy blouse. She went for luminous makeup and kept her tresses middle-parted and open. To enhance her ethnic look, she added several shiny yellow bangles.

As for the caption, the Shershaah star wrote, "Aur yeh hoon main! The exact tadka this story needs, I’m coming to spice things up! Join the chaos in the year’s biggest entertainer - #GovindaNaamMera in cinemas 10th June, 2022[sic]." The dramatic poster was graced with immense attention and appreciation. Many of her fans and followers flooded the comments section with positive messages. Several celebs also took the opportunity to compliment the actor and wish her luck for the new film.

However, one comment that stood out was by her previous co-star, Shahid Kapoor. Kapoor penned sweet words, "Yellow saari and kiara advani. Trust me it’s a killer combination[sic]." Kiara, responding to the same, dropped a series of yellow hearts. 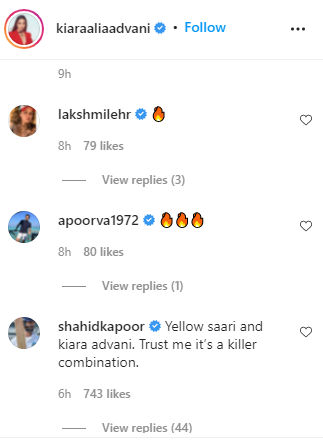 Many fans of Kabir Singh also replied to Shahid's comments. A fan commented, "Kabirrr! Arrey arrey Kabirrr!" While another one chipped in, "You and Preeti, the killer combination." A few fans also went on to request the duo to appear together in a film again after their amazing chemistry in Kabir Singh. Several months ago, Kiara even hinted that she and Shahid might be preparing something special for their fans. However, no official announcement has been made.

Furthermore, Govinda Naam Mera features URI star Vicky Kaushal in the titular role. The film is a light-hearted family entertainer that is helmed by Shashank Khaitan. The film is slated for release next year in June. Check out the posters of Vicky and Bhumi's characters.