Kriti Sanon played a QnA session with her fans on June 10. The actor was asked to say one word for Mahesh Babu but she described him in 19 words instead. 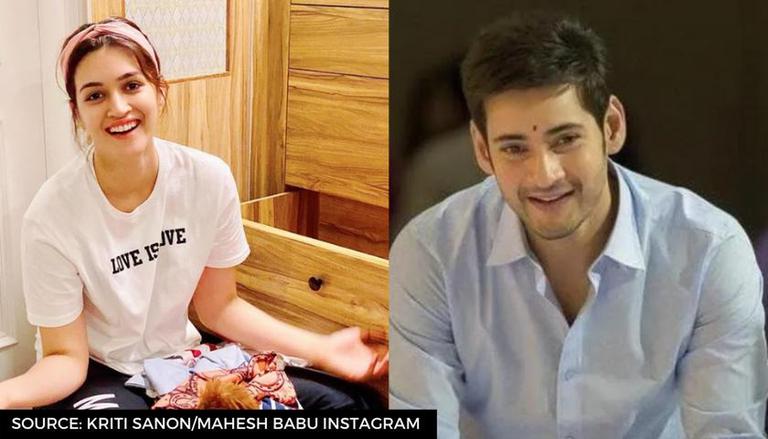 
Kriti Sanon on June 10 took to her Instagram to answer some of her fans' questions in a fun QnA session. One of her fans asked her to say one word for Mahesh Babu and Kriti Sanon had a sweet answer for it. She simply said, "Best! My first ever co-star. So humble and amazing. I hope I get to work with him again." Kriti also apologized that she was asked for just one word but she wrote 19 instead. Kriti Sanon and Mahesh Babu starred together in film 1: Nenokkadine. 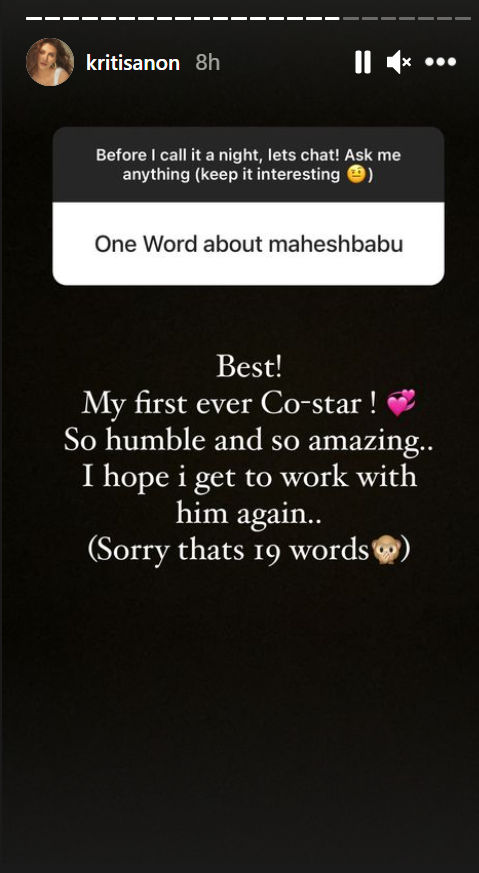 In Kriti Sanon's Instagram QnA, she answered several questions and also posted some unseen pictures. She was asked by a fan to reveal the release date of her upcoming film Mimi. The actor mentioned that she knows it but she is not allowed to tell anyone but the movie would be releasing soon. The actor also mentioned that her comfort food is paratha with butter or Rajma Chawal.

Kriti Sanon starred alongside Sushant Singh Rajput in the movie Raabta. As the movie completed 4 years of its release, Kriti shared a video on her Instagram and penned a heartfelt note talking about her experience. The video is a compilation of all the good memories she had from the movie. It includes BTS shots, some film scenes, and goofy moments she shared with her co-star and late actor Sushant Singh Rajput.

The actor penned a note talking about the movie. She wrote, "Tan lade, tan muk jaaye, Rooh jude, judi reh jaaye...I believe in connection, I believe that we are meant to meet the people we do... My Raabta with Sushant, Dinoo, and MaddockFilms was just meant to be..Films come and go...But every single film has so so many memories behind it... The connections we make & the moments we live with each other stay within us...Some more than others...Raabta was one of my best and most memorable experiences and it will ALWAYS remain extremely close to my heart... Little did i know that it would be our first and last..." (sic)

On the work front, Kriti will be seen in Laxman Utekar's upcoming film Mimi. The actor would portray the role of a surrogate mother. The actor posted pictures of her with a baby bump in 2020 that had gone viral after she had wrapped up its shooting. She had called the outing 'very close to her heart' and also had called it the 'most satisfying schedule' with a 'super passionate and hardworking cast and crew. Kriti Sanon also joined the cast of Farhad Samji's Bachchan Pandey. She will also be seen in Amar Kaushik and Dinesh Vijan's Bhediya alongside Varun Dhawan.

READ | When Kriti Sanon took a dig at star kids: 'They get their 2nd film before 1st releases'
READ | Kriti Sanon shares cute sneak-peek into Bhediya with her 'Ziro diaries'