Kriti Sanon Enjoys Her 'day Off' With The Cast And Crew Of 'Bhediya'; See Pics

Kriti Sanon took to Instagram on Monday, April 5, 2021, to share a picture of how she is spending her day off on the sets of Bhediya. See pics.


Bollywood actor Kriti Sanon took to Instagram on Monday, April 5, 2021, to share a picture of how she is spending her day off on the sets of Bhediya. The actor shared a collage on her Instagram stories where she can be seen having lots of fun with the cast and crew of the film. In the film picture, Kriti can be seen posing beside Varun Dhawan and the crew members. One can also spot Natasha Dalal all smiles for the camera. In the second picture, they can be seen taking a selfie which is truly unmissable. Along with the picture, the post also read, “#dayoffvibes”. Take a look at Kriti Sanon's Instagram post below. 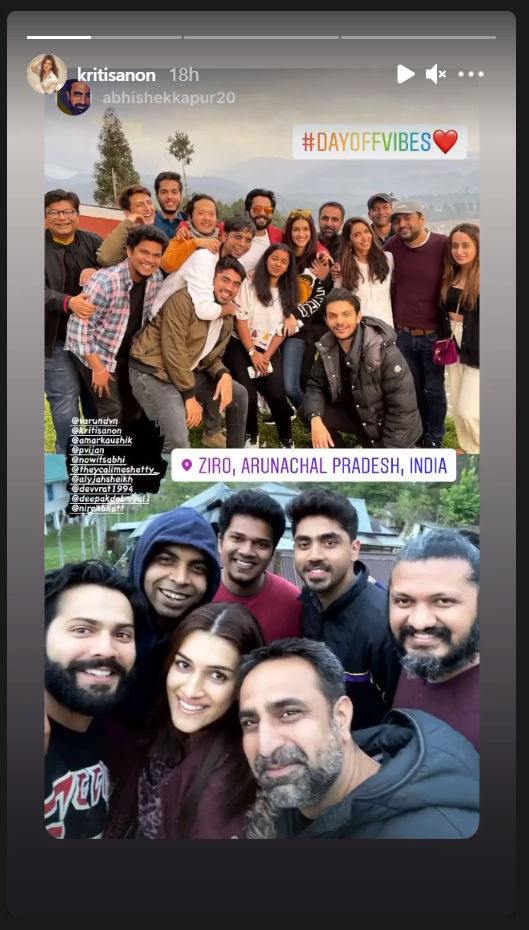 Actors Kriti Sanon and Varun Dhawan are currently filming their upcoming film Bhediya. The actors arrived in Arunachal Pradesh in March and appear to be having a good time in the hilly state. Both actors have been posting several photos and videos of themselves in picturesque locations in the state's northernmost region, as well as their fun moments together. Earlier to this post, a video of them began to make rounds on the internet where Kriti Sanon was seen playfully pushing Dhawan towards the lake and he almost lost his balance.

In the video, Kriti Sanon and Varun Dhawan were standing by the lakeside before filming a scene. Varun wore a red jacket, a white T-shirt, and black pants, while Kriti wore denim jeans and a red jacket with a matching muffler.  Dhawan was looking around, while Kriti pushed him slightly, causing the actor to almost lose his balance. She however soon pulled him back and Varun had a scared look on his face. Kriti found the scene too funny and she walked away from Varun as a camera appeared in the video to shoot their scene for the film. Watch the video below.

After arriving in Arunachal Pradesh for the first schedule of Bhediya, the entire team met with the State Chief Minister, Pema Khandu, the Minister of Home and Interstate Affairs, Bamang Felix, the Commissioner to the HCM, Sonam Chombey, and the Chief Secretary, Naresh Kumar. Varun and Kriti celebrated Holi in the state's Hapoli village. Kriti and Varun were seen walking circles around a bonfire for the Holi festival in a video shared by a fan page. Kriti was seen dancing to the song 'Hookah Baar' from Khiladi 786 and grooving with the crew members in a video shared by Manav Manglani. Watch video.