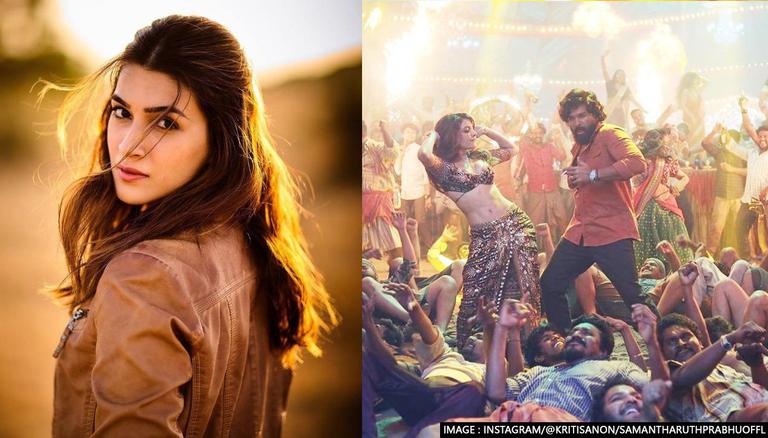 
Actor Samantha Ruth Prabhu proved her dancing prowess in the highly energetic number Oo Antava from the Allu Arjun starrer Pushpa: The Rise part 1. The Makkhi actress made several heads turn with her sizzling performance and she stunned her fans with her sensuous avatar in the song. The song titled Oo Antava garnered immense love from the audience.

The Manjili fame is expanding her horizon, and she is experimenting with her choice of films and choices of roles. Samantha a few days back expressed on her social media handle that it was really difficult for her to do this dance number. The song marked the actor's first dance number with Allu Arjun who is known for his exceptional dancing skills. Many celebrities from the film fraternity praised Samantha for her daring career move. Recently, Kriti Sanon joined the bandwagon and took to her Instagram handle, and admired Samantha for her brilliant dancing skills.

Sharing a teaser poster from the song, the Mimi actress wrote, “Love this song !!! @samantharuthprabhuoffl you are on fire girl !!".Samantha responded with equal warmth and reposted the story and wrote"Mimi, thank you @kritisanon". 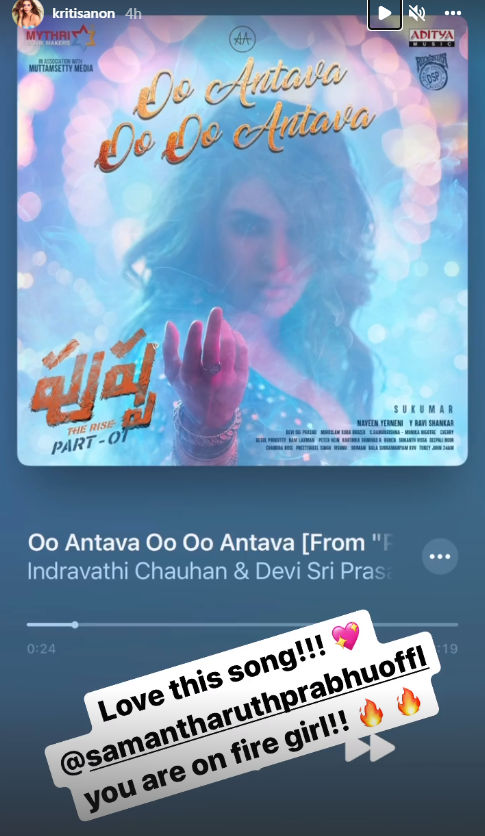 About the track Oo Antava from Allu Arjun starrer Pushpa: The rise part 1

Choreographed by Ganesh Acharya, the song has groovy beats and it is sung by Indravathi Chauhan while the lyrics are given by Chadrabose. Devi Sri Prasad has composed the music, and the song is different from other songs since it has some complex dance sequences in it. Samantha a few days back, shared the BTS video of her rehearsals for the song where she gave us a glimpse of her hard work. The actress demonstrated great patience and determination to learn the choreography. She is receiving lots of love from all corners of the country for her dancing skills.

Meanwhile, Allu Arjun's Pushpa: The Rise emerged as one of the biggest films of 2021 as it minted over Rs 300 crore at the box office across the world. The makers are now all set to release the second part of the film in several Indian languages to reach as many audiences as possible.

On the work front, Samantha Ruth Prabhu will next share screen space with Nayanthara and Vijay Sethupathi in Vignesh Shivan’s upcoming film Kaathu Vaakula Rendu Kaadhal. The film might go on floors in February this year.

WE RECOMMEND
Samantha Ruth says she's 'ready to feel good things' weeks after split with Naga Chaitanya
Kriti Sanon to have 5 releases in 2022; shares what makes it 'exciting' for her
Samantha Ruth Prabhu spends time with friends in 'heaven' that she calls Goa; See pics
Inside Samantha Ruth Prabhu's Christmas celebrations with her dogs & movie night; See
Samantha Ruth & Taapsee Pannu to collaborate for female-centric pan India film? Read here
Listen to the latest songs, only on JioSaavn.com