The 3rd edition of the Lux Golden Rose Awards as the brand completed 90 years held in Mumbai on Sunday, 18 November was truly a star-studded affair.

The 3rd edition of the Lux Golden Rose Awards as the brand completed 90 years held in Mumbai on Sunday, 18 November was truly a star-studded affair. The event saw the who’s who of Bollywood, turning up in their stylish best; the men arriving in classy suits, while the women dazzled in glamorous gowns and traditional outfits. Shah Rukh Khan, Aishwarya Rai Bachchan, Alia Bhatt, Kareena Kapoor Khan, were among those present, who were winners, not just in the style department, but on the stage too.

Read: Koffee With Karan Season 6 | Taimur Ali Khan’s Pictures Worth More Than Any Other Superstar In Bollywood? Saif Answers

Timeless diva Rekha was among one of the senior Bollywood celebrities that added the charm as she walked the red carpet in her signature golden zari saree for her support to the United Nations He For She campaign. One of the magical moments from the grand night was when Shah Rukh Khan and Karan Johar went down on their knees for Rekha. The two presented the 'Timeless beauty award' to Rekha and we can't get over the way, the two went on their knees in a respectful manner. 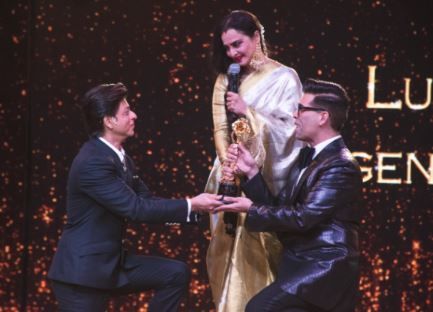 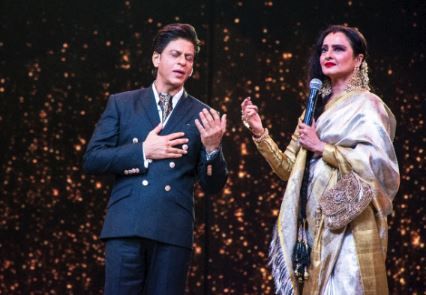 Some of the other highlights of the evening included timeless beauties Rekha, Hema Malini, Helen and Zeenat Aman coming together on the stage for a segment, making the audience fall in love with them like always. Madhuri gave the perfect tribute to their famous tracks, by performing on Hema Malini’s ‘Dream Girl’, Zeenat Aman’s ‘Laila Mein Laila’ and  Helen’s ‘Yeh Mera Dil’. The actor also performed to the late actor Sridevi’s ‘Hawa Hawaii’ and her own hit ‘Tamma Tamma.’

Read: Lux Golden Rose Awards: All Winners And Highlights From The Star-Studded Affair

Among the other performers were Varun Dhawan, who gave a tribute to his female co-stars like Taapsee Pannu and Alia Bhatt in his performance. Kareena Kapoor Khan also lit up the stage with her performances, which included tracks involving Shah Rukh Khan and Salman Khan, her husband Saif Ali Khan and ‘Ki & Ka’ co-star Arjun Kapoor. ‘Dhadak’ stars Ishaan Khatter and Janhvi Kapoor also added further entertainment with their performances.