The actress who has been stationed in the US for two and a half months due to the ongoing pandemic, treated fans with a stunning view of her villa. 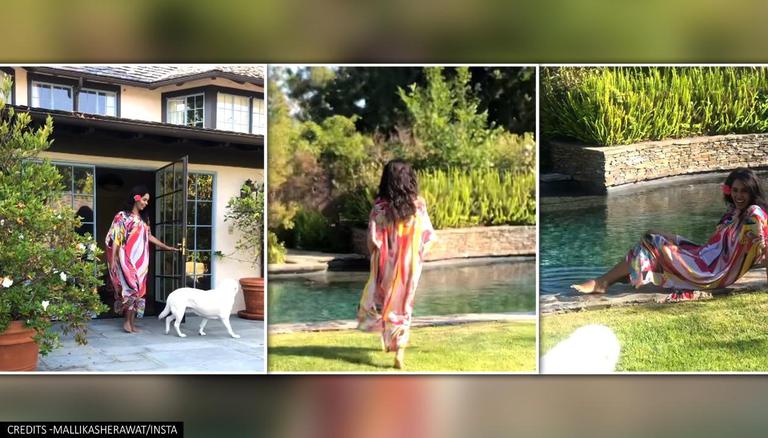 
Actress Mallika Sherawat, who has been staying in LA for a while now, recently took to Instagram and shared a video while giving out chilling vibes from her sprawling Los Angeles villa. The actress who has been stationed in the US for two and a half months due to the ongoing pandemic, treated fans with a stunning view of her villa in a video while calling it ‘Monday motivation.’

Mallika Sherawat's LA villa is something you can't miss watching

The video begins with blue French doors and a white dog playing on the patio waiting for the actress to step out. Soon the Murder actress opens the door in a loose, multi-coloured dress. She then spoke to her dog about ‘chilling in the pool’ as she walks towards a small swimming pool in between a huge garden. She dips her feet in the pool and splashes water around as she calls her dog to enjoy with her. Sharing the video, Mallika used many hashtags such as "#happiness #positivemindset #decisions #joyinthejourney #confidence #positivemind." Mallika has been living at this home in Los Angeles for the last 2.5 months. She often shares pictures from the home and the outdoor area.

Mallika’s recent film RK/RKAY, directed by Rajat Kapoor, was recently released in the States and Canada in the theatres. She will be seen making her digital debut with two back-to-back web shows. Additionally, she is also looking at making a splash closer home with Indian content that she working on and a few film offers that she is considering. This is not the first time Mallika has given fans a glimpse of her Los Angeles villa. Earlier as well, she has shared pictures posing in the garden area and well as near the swimming pool.  In 2013, the actress had spoken about moving to Los Angeles, in an interview with Variety. She opened up about making a ‘conscious decision’ to divide my time between Los Angeles, America, and India. She then added that now she can experience that social freedom in America and when she goes back to India which is so regressive for women.