'You can sit with us' Mira Rajput Shares Glimpse Of Kids Misha & Zain's Study Hour In Latest Post; See Pic

Shahid Kapoor’s wife Mira Rajput who is known for her positive social media posts recently gave a glimpse of study time with kids Zain and Misha. 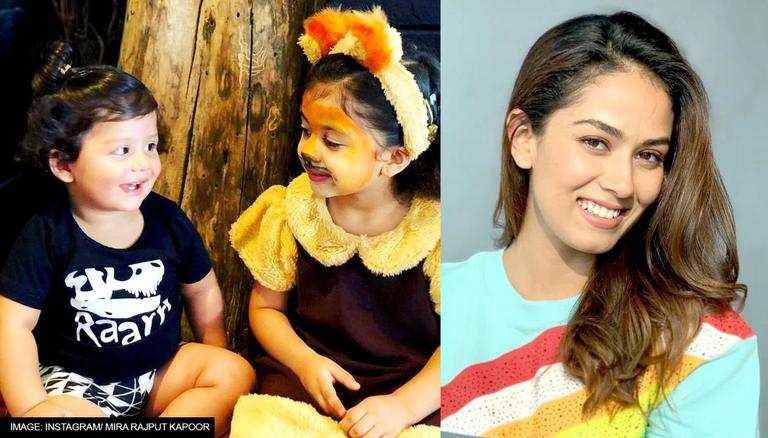 The picture shared by Mira on her Instagram story saw Mira teaching her children from a book kept on a table. Although Mira has kept the faces of her children hidden, both Zain and Misha have placed their hands on the children's book kept in front of them. While sharing the post, Mira Kapoor accompanied the picture with a quirky emoticon that read, “You can sit with us’.

Earlier, Mira Rajput, who shares a great bond with her mother-in-law, Neliima Azeem shared a hilarious take on the 2020 viral track Rasode Me Kaun Tha while sharing a selfie with Azeem. Sharing the photo, Mira Rajput hinted that neither she nor does Azeem like to cook. She wrote, "Rasode mein kaun tha? You can bet neither of us." She further shared her favourite beverage and wrote, "Azeem's Bring on the chai and chikki." 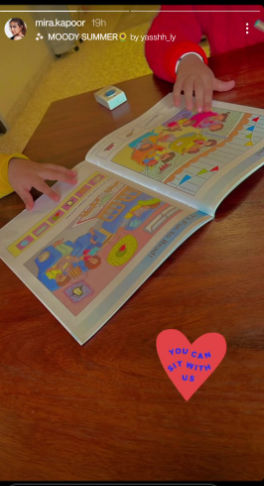 On the special occasion of New Year 2022, Mira Rajput took to Instagram handle to share a mushy photo alongside hubby Shahid Kapoor. While sharing the picture, Mira wrote, “It’s going to be a great one because Mr. K agreed to a photo. Happy New Year everyone. For the first time, I’m comfy as hell on NYE. Pajamas, fuzzy socks, and bear to love. Can we do this every year?” Shahid Kapoor and Mira Rajput had tied the knot in a private ceremony in 2015. They were blessed with their first child, daughter Misha in August 2016. The couple welcomed their second child, son Zain in September 2018.

Meanwhile, on the work front, Shahid Kapoor recently announced the release of his upcoming film Jersey being postponed owing to the COVID-19 surge. Apart from this, he will also be seen in a film directed by Ali Abbas Zafar and a series directed by Raj and DK.

WE RECOMMEND
Arjun Kapoor misses Malaika; Mira Rajput greatful to Shahid as they welcome New Year 2022
Kangana Ranaut waves to paps; Shahid Kapoor, Mira Rajput jet off for New Year celebrations
Shahid Kapoor reveals wife Mira's reaction to his kissing scenes with female co-stars
Mrunal Thakur, Shahid Kapoor celebrate as 'Baliye Re' from 'Jersey' garners 15 mn views
'Jersey': Shahid Kapoor opens up on prepping for his role; 'this one has my BLOOD'
Listen to the latest songs, only on JioSaavn.com