On the occasion of Mother's Day 2022, Anushka Sharma penned a heartfelt note for her mom and shared an unseen picture of her daughter Vamika. 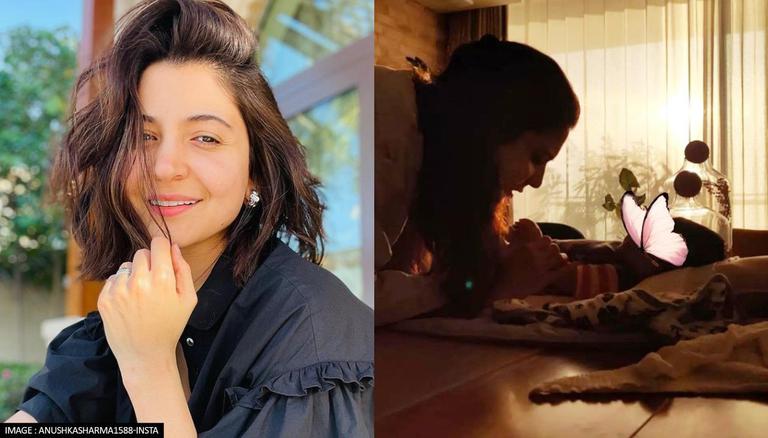 
Anushka Sharma is known to delight fans with moments involving her daughter Vamika. The actor often shares pictures with the little one, making netizens awestruck. On the occasion of Mother's Day 2022, the Rab Ne Bana Di Jodi star penned a heartfelt note for her mom Ashima Sharma, while also sharing an unseen picture of Vamika.

Taking to her Instagram handle, Anushka Sharma shared an adorable Mother's Day post. In one of the pictures, the 34-year-old could be seen smiling and playing with her daughter.  She held her daughter's hand and adorably looked at her, while her mother stood behind her.

In the second picture, Anushka's mother could be seen donning a black-and-grey-coloured salwar suit. She had a dog resting on her lap as she smiled while looking at the pet. In the caption, Anushka wished her mom a Happy Mother's Day and thanked her for watching over her. She also thanked her for being very supportive, especially after she welcomed Vamika on January 11 last year.

She wrote, "Happy Mother’s Day Maa Thank you for watching over me and being such a huge support for me especially in the last year and few months. Your will power and strength is phenomenal and you are so so loved by us all." In the comments section, fans sent their love and also lauded her for being an adorable mother to Vamika.

READ | Anushka Sharma with Vamika to Kareena with Karisma; celebs spotted out & about in the city

While Anushka Sharma and her husband Virat Kohli have not revealed the face of their daughter Vamika, they have often shared some cute pictures of them bonding with her. Last year in October, Anushka Sharma shared a cute photo of the Team India cricketer playing with their munchkin. In the photo, the 33-year-old was all smiles while Vamika enjoyed in the play area. Sharing the picture, Anushka wrote, "My whole heart in one frame."

Anushka Sharma on the work front

Anushka Sharma is currently gearing up to portray former Indian Women's team captain Jhulan Goswami in the upcoming film Chakda Xpress. The actor has been prepping for the movie and is also taking cricket lessons. The film will be releasing on the OTT giant Netflix.

READ | Anushka Sharma & Virat Kohli shell out couple goals as they hit the gym together; Watch
READ | Sonam Kapoor responds to Anushka Sharma's query; reveals what kind of mom she would be