MUST READ: Anurag Kashyap Tweets His Heart Out Over News Of His Former Actor Savi Sidhu Becoming A Security Guard

Anurag Kashyap writes about Savi Sidhu on his Twitter handle. Here's what the director said -

Savi Sidhu, who acted in Anurag Kashyap's 'Black Friday' shared his story in a 5-minute video where he is now working as a security guard. After emotional story was shared online, the director poured his heart out on Twitter about how he respects Savi Sidhu and the artistes like him.

In a series of 9 tweets, Anurag wrote: "There are so many actors out there who don’t have work. I respect Savi Siddhu as an actor and have cast him thrice when he earned the role. I respect him that he chose to live his life with dignity and picked a job unlike so many entitled out of work actors who have either become alcoholics or wasted themselves away."

Giving example of Nawazzudin Siddiqui, Anurag wrote: "Nawaz used to be a watchman, I used to be a waiter, I met one actor who sells bhelpuri on streets, I know and actor from Black Friday who drives a rickshaw, the lead from Salaam Bombay used to do the same .. I have seen the great Uday Chandra who did “Hum Paanch” and “Khel Khiladi Ka” in my early days walking the street. This is also true for many people in all walks of life. This could also be me or anyone else in the future. To give an actor a role out of sympathy is insulting."

Anurag assertively wrote on social media about how everyone should be proud of Savi that he didn't let the circumstances destroy him: "The art and the artist. Savi will have to help himself. Only thing one can do is get the casting directors to audition him for him to earn the role and for that he will have to walk to that casting directors office like million others. He has made a conscious choice and ..One should be proud of him that he did not allow the vanity of the artist to destroy him , and he actually does a job . I have writers that I have worked with who are always borrowing money, I have seen filmmaker’s I have admired borrow money from me for a meal.."

Talking about his current job which Sidhu said is tough and mechanical, Anurag said: "To be a watchman is a job, I don’t see it as a small job or big. At least he is not begging . And I genuinely believe that charity does not make art or an artist. There are millions of stories like Savi Siddhu’s. You want to help artists like him then you need to start watching their art by paying for it, by actually be a paying audience. Tweeting the story to me won’t help. I have worked with new comers all my life and I move on to the next new talent I can find . We all make conscious choices. Go to cinemas and buy tickets for films that has unknown amazing talent like Savi Siddhu to make sure that they continue to be what they are best at, to be the artist they want to be. That’s all I had to say . Thank you" 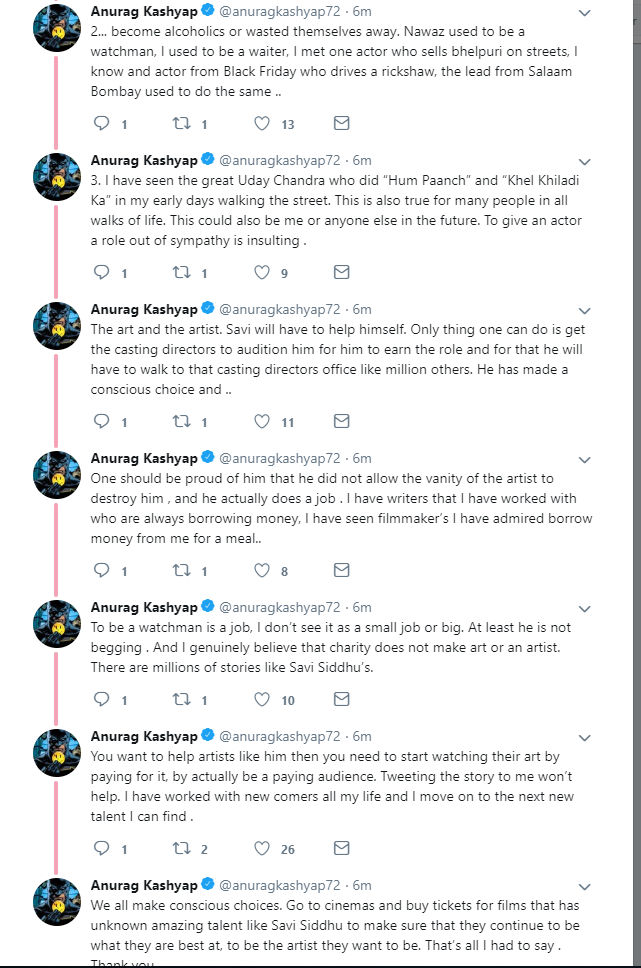 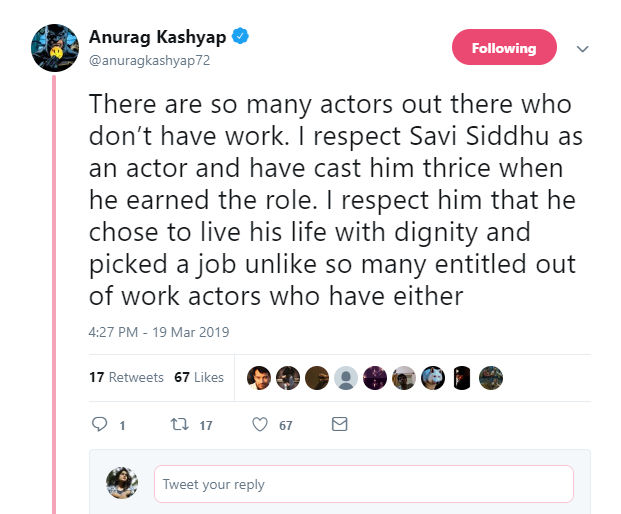