'My Rumoured Boyfriend But...', Kiara Advani Has THIS To Say For Sidharth Malhotra As The Duo Wrap Up SherShaah Schedule

Kiara Advani who was currently shooting for 'Shershaah' opposite Sidharth Malhotra, a film based on Kargil war hero Vikram Batra, recently took to her Instagram handle to post that the duo have wrapped the first schedule of the film. But the post wasn't anything regular! Kiara threw in a little quirk in her caption and wrote: "My rumoured boyfriend buy legit friend it's been a pleasure working with you this sched! See you on the next one" 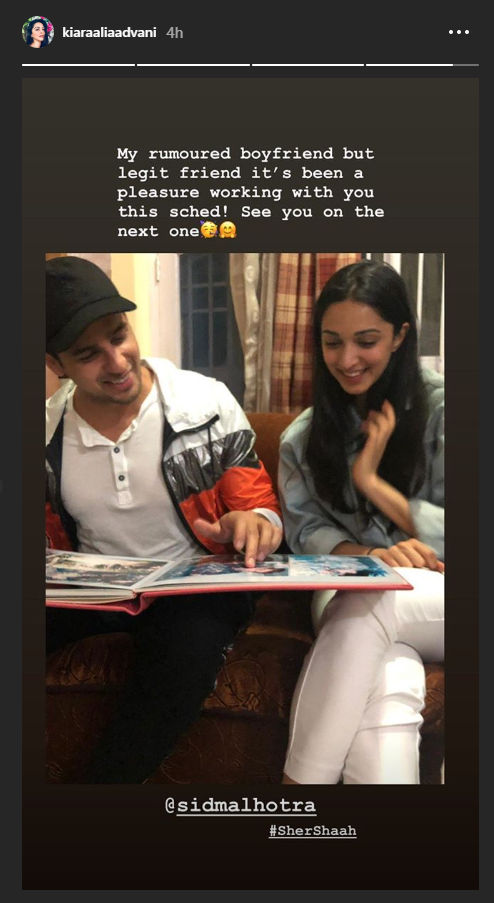 Rumour mill was abuzz last year when reports were circulated about Sidharth Malhotra and Kiara Advani. When Sidharth appeared on Koffee with Karan and was asked about the same, the actor replied: "The amount of rumours I have had in the tabloids, I’m having lesser fun in real life. I wish they were true. Kiara is lovely. We are going to work together in future. But I’m single."

This is not it. When Alia Bhatt (Sidharth's ex-girlfriend) was also asked on Koffee with Karan about whom she would like to set up Sidharth with, she immediately said, 'Kiara'.

On the professional front, Kiara will next be seen opposite Shahid Kapoor in 'Kabir Singh', the Hindi remake of the 2017 Telugu film Arjun Reddy. She will also feature opposite Diljit Dosanjh in 'Good News', which also stars Kareena Kapoor and Akshay Kumar in pivotal roles.

Talking about Shershaah, the film which is produced by Karan Johar and will be directed by Vishnu Varadhan while the story is written by Sandeep Srivastava.

She will also be seen in 'Laaxmi Bomb'—the remake of the 2011 Tamil film Muni 2: Kanchana—with Akshay Kumar.