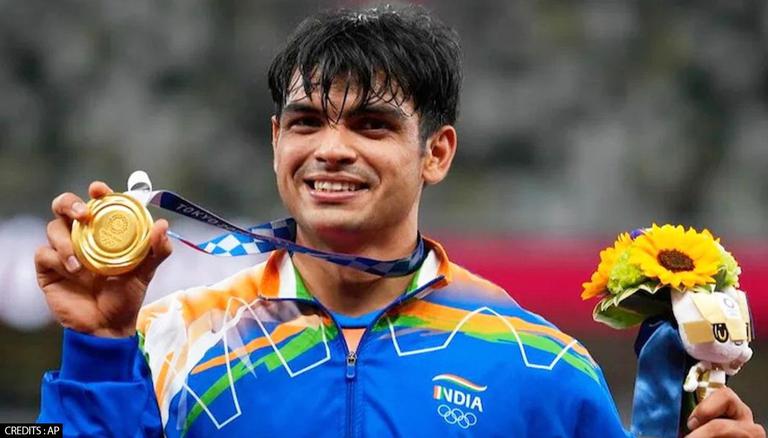 
Javelin thrower Neeraj Chopra created history on Saturday, August 7, by winning India's first Gold medal for athletics at the Tokyo Olympics. As the athlete made the country proud, a host of celebrities and political figures took to their social media handles to show their support and honour him. Bollywood celebrities also joined the fray soon; here's what they said -

Neeraj Chopra became the first athlete from India to win a track-and-field medal in the Olympics, with a throw of 87.58 m in the second round. Neeraj Chopra's medal is India's first gold at Tokyo 2020 and the second ever at the Summer Games. Abhinav Bindra, who won the 10-meter air rifle competition in Beijing in 2008, was India's only other Olympic gold medalist in an individual competition.

For this historic occasion, several Bollywood celebrities extended their best wishes for the Javelin thrower. Anushka Sharma took to her Instagram handle and shared a post featuring Chopra, where she wrote about he makes "the country proud." Check out Anushka Sharma's Instagram story below - 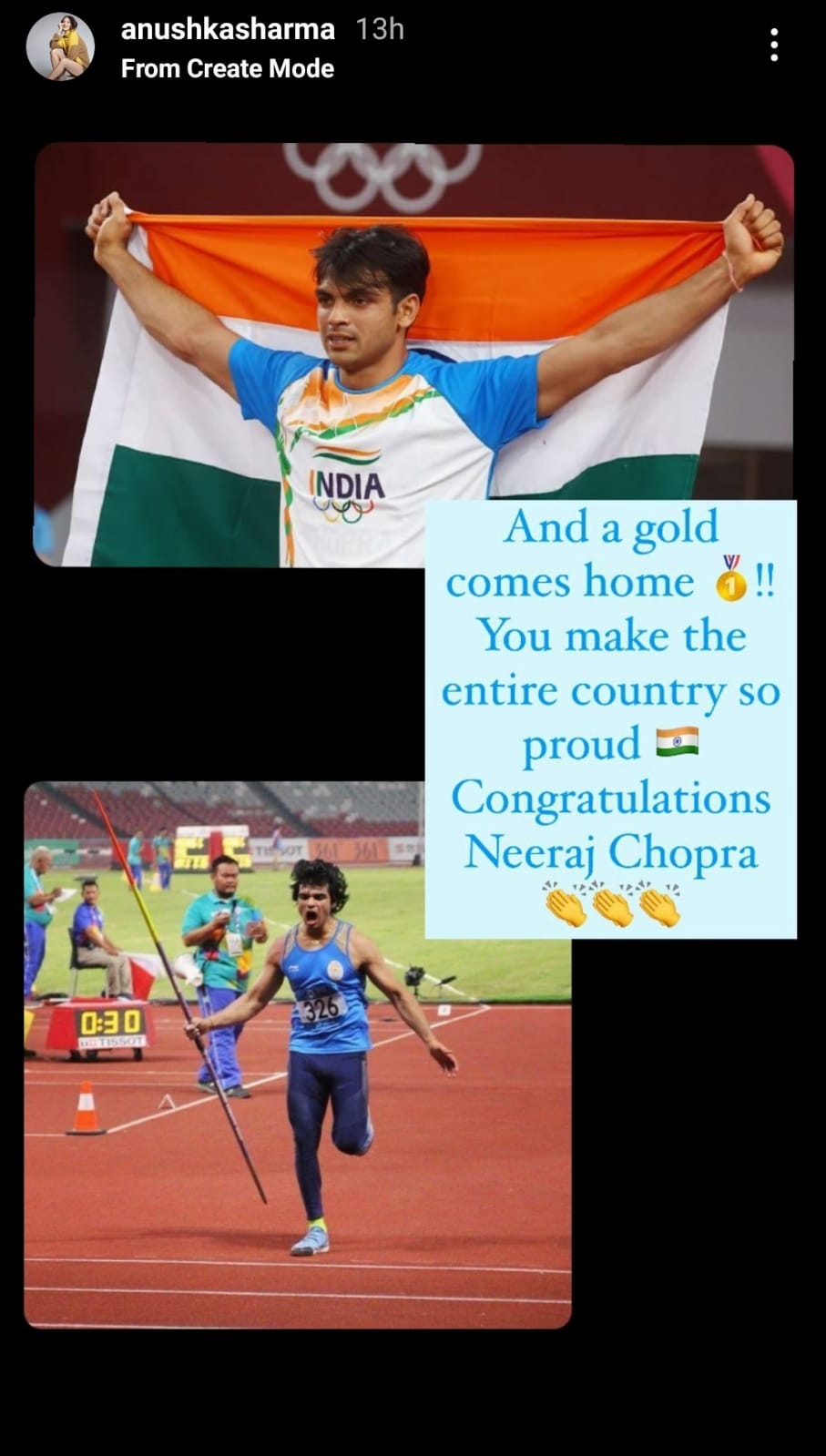 Ayushmann Khurrana also took to his Instagram story to express how proud he was. The Andhadhun actor shared the story saying, "An Olympic gold in athletics. A new chapter for our nation. Proud of the golden boy.". Take a look at Ayushman's story below - 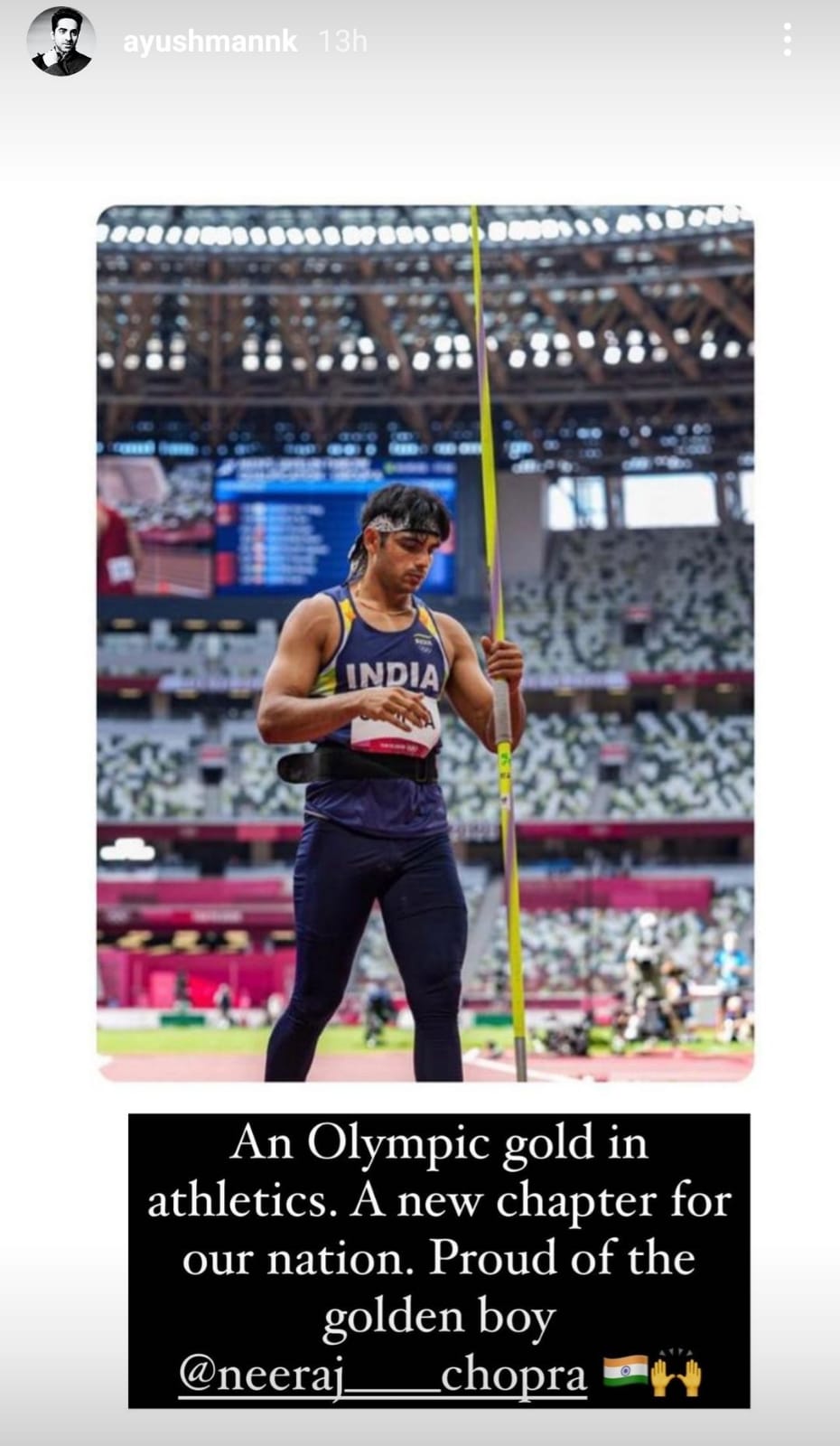 Sidharth Malhotra also took to his Instagram handle to congratulate Neeraj Chopra for his gold medal-winning feat. The actor shared the story congratulating and thanking him for being an inspiration to everyone. Malhotra also shared a video of Chopra from the Tokyo Olympics 2020, in which he could be seen performing his recent medal-worthy feat. 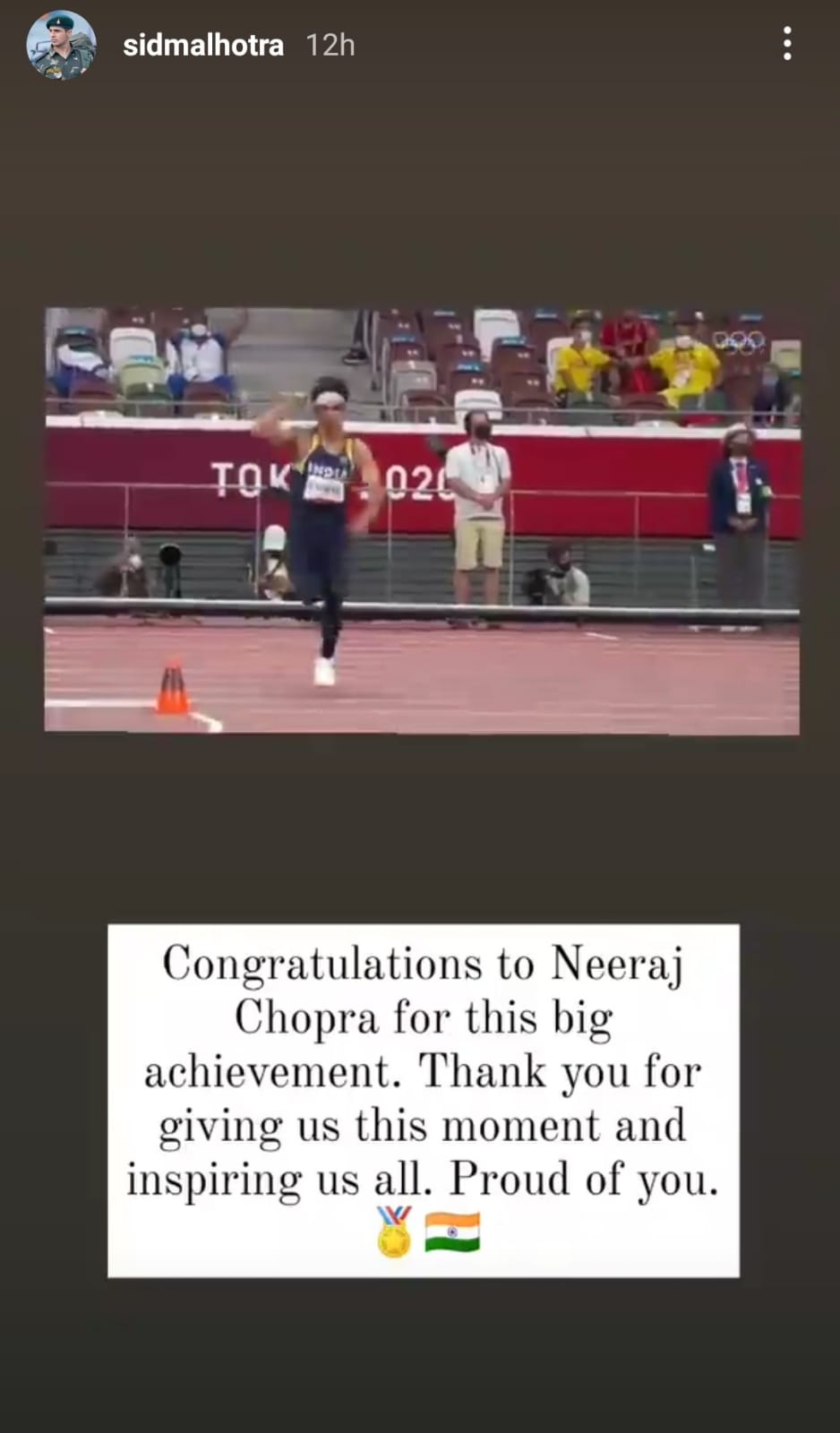 Actresses Deepika Padukone also took to her Instagram story to express her pride over the recent impressive feat. In classic style, Padukone shared a sketch of a javelin thrower with Chopra's name on it, with the player standing on the 'Ace' card. Deepika shared her story with a "medals tally" for India, which counted 1 gold medal, 2 silvers, and 4 bronze medals. 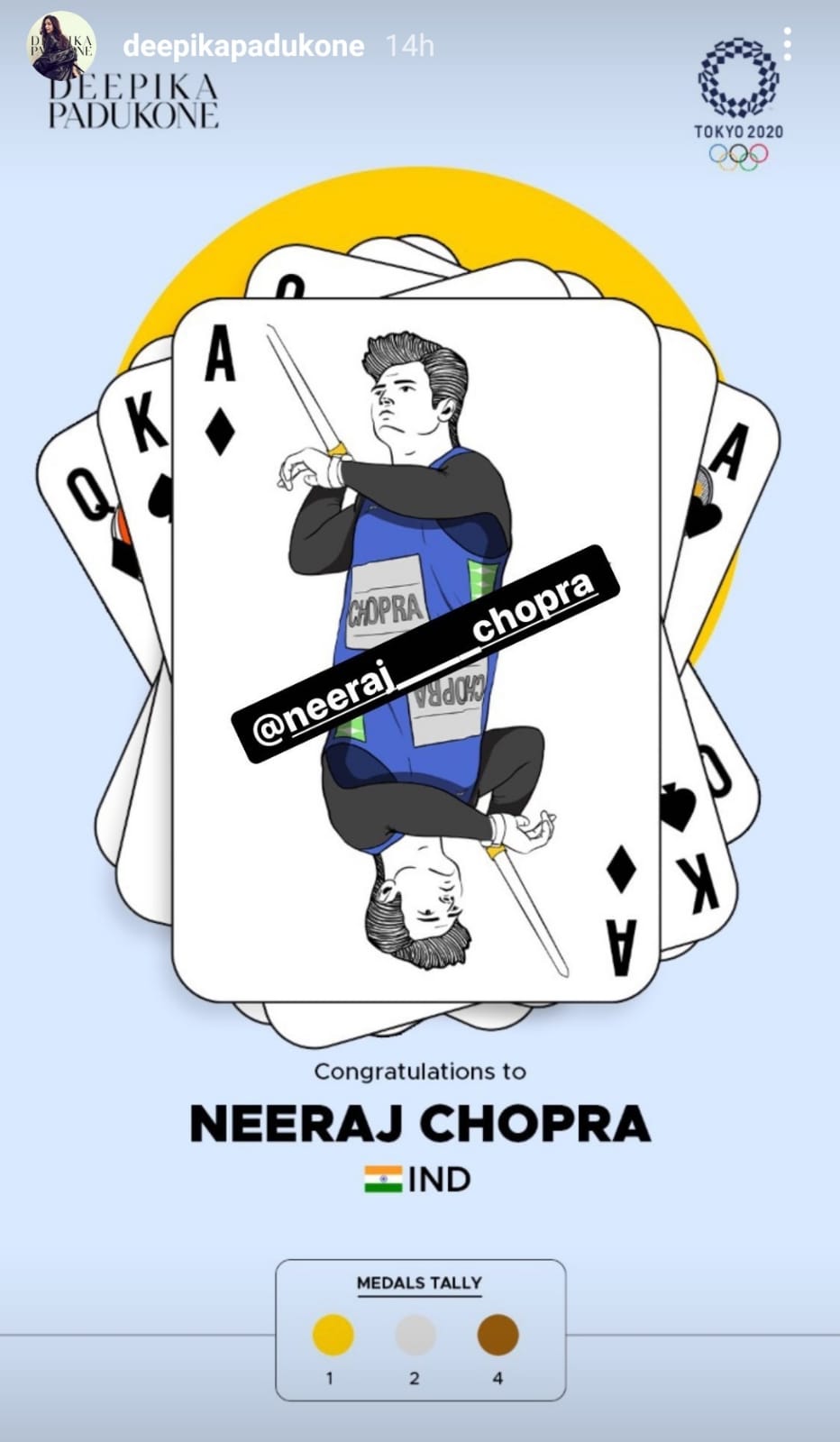 Kareena Kapoor Khan also shared a story, featuring Neeraj Chopra and congratulating him on his victory. Alia Bhatt on the other hand, shared her story with a long caption about how it was a moment of pride for the nation. Bhatt also thanked Chopra for inspiring everybody and congratulated him. The Highway actress even called the javelin thrower "India's golden boy." 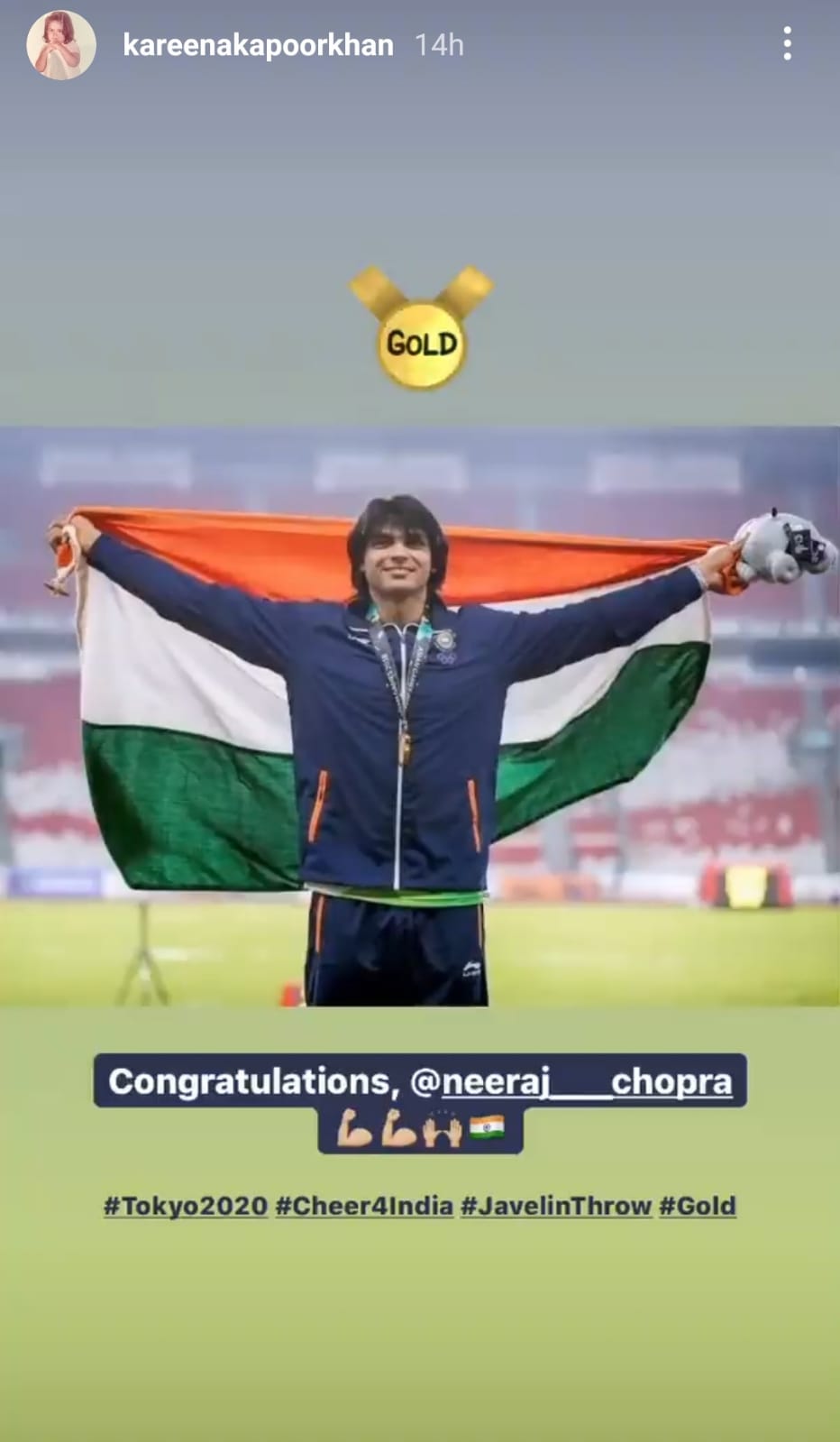 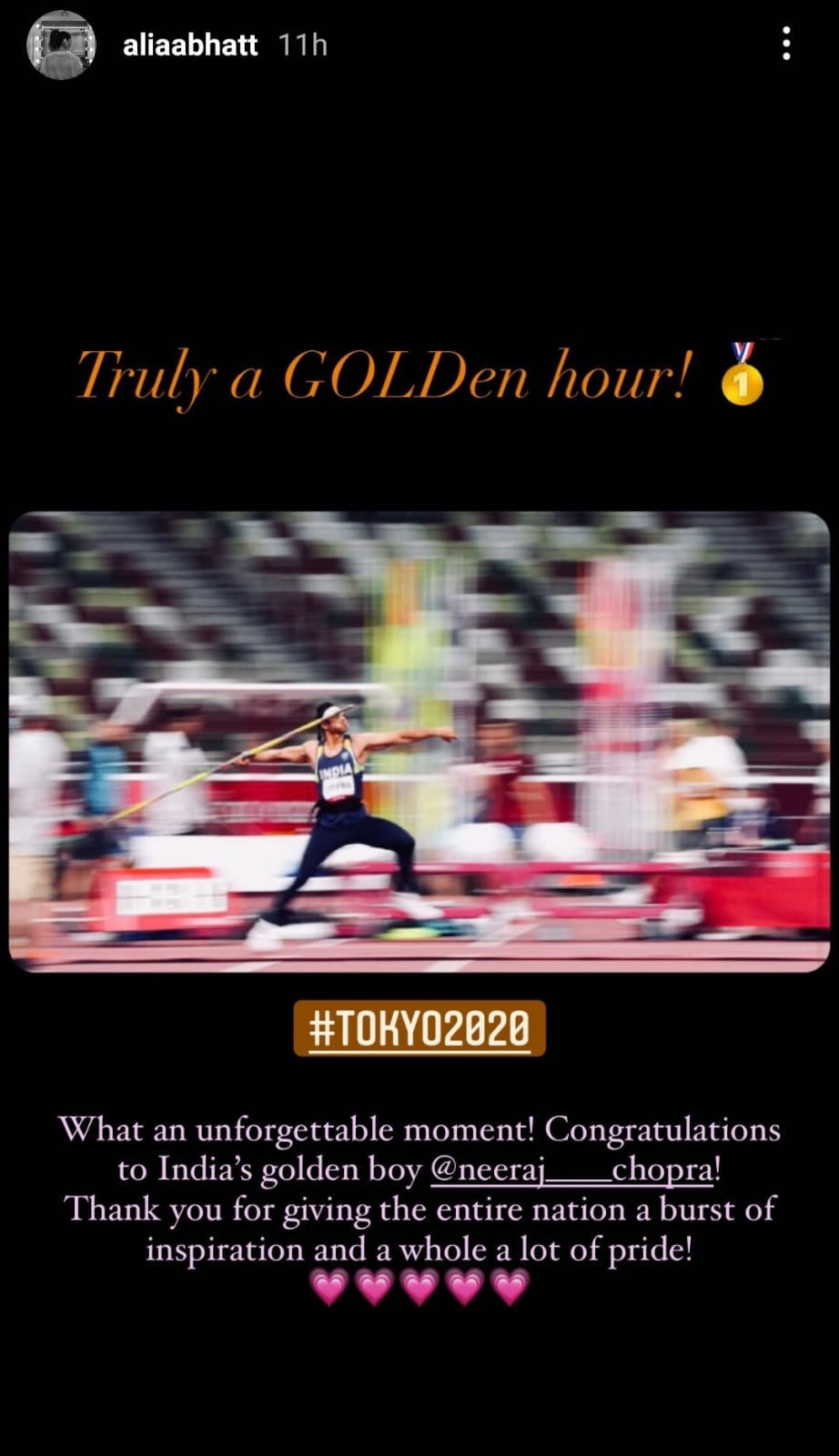 While several celebs in Bollywood took to their Instagram handles to share their wishes for the gold-winning javelin thrower, Neeraj Chopra, several others took to Twitter as well. Veteran actor Anil Kapoor shared an excited tweet with his fans over Chopra's victory and expressed his pride. Rashmika Mandana also shared her excitement about the recent achievement with a short and sweet tweet.

Mumbai Saga co-stars, Emraan Hashmi and John Abraham also took their Twitter handles to express their pride over the "historic" accomplishment. Taapsee Pannu also also tweeted about how happy she was, claiming she was "jumping with joy." Take a look at some of the tweets below -

Oh my god!✨ #Gold it is! Like woah! 🔥 this is crazy awesome! Congratulations #NeerajChopra for your win! 💃🏻
#JavelinThrow #TokyoOlympics2020 ✨ #proud ✨ pic.twitter.com/Anh98S4h9I

Congratulations @Neeraj_chopra1 on your historic accomplishment. The entire nation is proud of you! 🇮🇳🥇#CheerForIndia #Tokyo2020 #Olympics https://t.co/t2TNzVvtl2