Neha Dhupia Is 'happy To Be Back On Feet' Post Second Child; Says 'trying To Find Balance'

Taking to her Instagram account on Oct 19, Neha Dhupia uploaded a reel showcasing BTS from her first shooting stint after welcoming her second child. 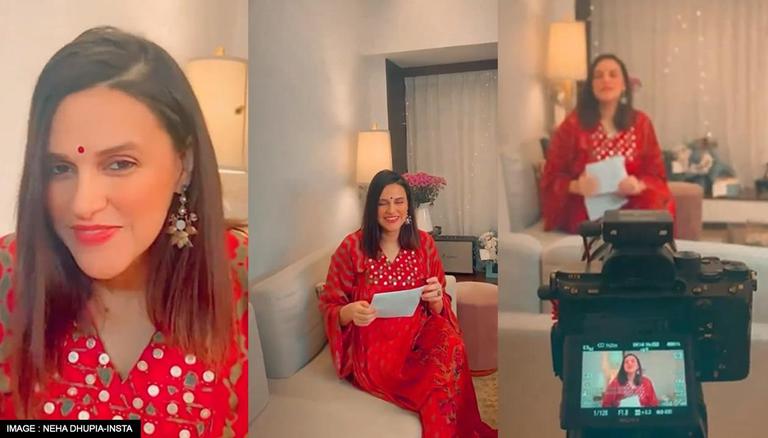 
Neha Dhupia has embarked on her work commitments after giving birth to her second child earlier this month. The actor recently took to her Instagram handle and uploaded a reel wherein she can be seen rehearsing a script as she commences shoot in a home setup. Dhupia iterated that she tried inching back to work just six days after her delivery, with no part of her ready to stay away from her infant.

She further revealed that the two hours in front of the camera were filled with "sweet cries of hunger" and her aim to strike a balance, concluding that she is "just happy to be back up" on her feet. Neha got married to Angad Bedi in a private ceremony in 2018 and the duo is also parents to daughter Mehr.

Neha Dhupia back to work after second delivery

Taking to her Instagram handle on Tuesday, October 19, the Sanak actor uploaded a reel in which she can be seen clad in a deep red Indo-western outfit as she gears up for work. Sharing the BTS clip, Dhupia wrote, "6 days post our baby was born I tried inching back to a bit of work … ofcourse #workfromhome it was as no part of me mentally , Emmotionally or physically was ready to be away from him or step out. Took two hours off but it was nt an uninterrupted one in front of the camera , with sweet cries of hunger and me trying to find my balance too , he and I pulled thru … baby steps but we ll get there soon. Jus happy to be back up on my feet'. Take a look.

READ | Neha Dhupia and Angad Bedi steal a kiss when the 'parents aren't around'; WATCH

Neha and Angad Bedi have been sharing her pregnancy diaries with their followers on social media. Neha also uploaded a series of photos with the healthcare workers and her doctor who nursed her to health in hospital. The string of uploads also gave a fleeting glimpse of the newborn's face. Take a look.

Meanwhile, Neha Dhupia was recently seen in Vidyut Jammwal starrer Sanak, which marked its premiere on October 15 on Disney+ Hotstar. Dhupia was seen as ACP Jayati Bhargav trying to save the hostages from the hospital under attack.

WE RECOMMEND
Neha Dhupia jokes about being pregnant ever since she met husband Angad Bedi
Angad Bedi calls Neha Dhupia 'Brave girl' as she prepares for delivery; WATCH
Neha Dhupia celebrates the birth of her son; says 'You have brought us so much joy'
Angad Bedi and Neha Dhupia drop first glimpse of their newborn boy; Watch video
Neha Dhupia and Angad Bedi steal a kiss when the 'parents aren't around'; WATCH
Listen to the latest songs, only on JioSaavn.com