Nimrat Kaur took to her social media to pay tribute to the late Bollywood actor and her co-star from the movie The Lunchbox on his death anniversary.


A year ago, Bollywood suffered the loss of one of the most talented and respected actors of the industry, Irrfan Khan. At the age of 53, the veteran actor suffered from a neuroendocrine tumor and died while under treatment for a colon infection. On the occasion of Irrfan Khan's death anniversary, his The Lunchbox co-star, Nimrat Kaur paid him an emotional tribute with an Instagram post.

In an emotional tribute to the late actor, Nimrat shared a monochrome picture of Irrfan Khan smiling brightly, The actress wrote in the caption thanking Irrfan Khan for the gift of his life. She also added the hashtag #IrrfanForever. The duo acted in the 2012 superhit romantic drama The Lunchbox and was praised for their chemistry in the movie. The Lunchbox cast also featured actors such as Nawazuddin Siddiqui, Bharati Achrekar, and Nakul Vaid.

Fans gathered together to pay their respects for the late actor and left words of condolences for the actress. The love and support towards the late actor poured in under the post and many left comments praising the late actor for his kind personality in real life. One person commented 'What a gem he was. It saddens me using past tense'. Many fans appeared sad as they described what a great person Irrfan Khan was and how he was gone too soon. 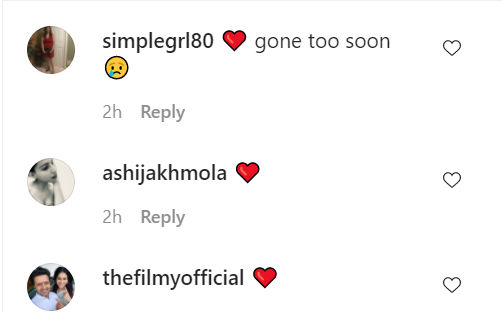 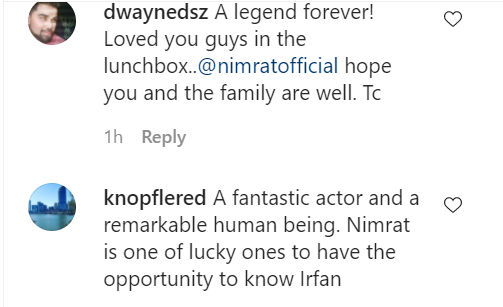 The late actor had an impressive career in Bollywood spanning over 30 years with his Bollywood debut in the year 1988 in the movie Salaam Bombay!. Achieving massive success in Indie as well as commercial movie, Irrfan went on to build a career in Hollywood with movies such as Life of Pi, Slumdog Millionaire, and The Amazing Spider-Man. Irrfan's Bollywood movies such as Paan Singh Tomar, Hindi Medium, and Life in a... Metro contributed to his success.

READ | On Irrfan Khan's death anniversary, Babil writes of 'a legacy that has been concluded'