Bollywood actor Hrithik Roshan is known for being quite a fitness buff in and around tinsel town.

Bollywood actor Hrithik Roshan is known for being quite a fitness buff in and around tinsel town. The 'Super 30' actor has been sweating it out at the gym meticulously and has posted yet another video of a pulsating workout. Sharing the video with a motivational quote, Roshan wrote: "You'll never get there, the place you want to reach so bad, but you will not be able to get there. But, don't stop trying you fool, that is the fun'.

You’ll never get there . That place u wanna reach so bad. U won’t ever get there. But don’t stop trying u fool. That’s the fun. . . And I guess the rule has changed from “faaa” to “fudge”. . . ZMR. 30lbs. 2.10min. 6 reps #ZMR #patience #Resilience #NoPainNoGain #Hrx #onemorerep #createyourself #bethebestversionofyourself #therearenoshortcuts #doitforyou #workonyourself #pushboundries #keepgoing

Ever since the video has been posted, fans and netizens seem to be super impressed. While one user said that it's quite "inspiring", the other one said that "specular efforts, discipline training, no pain, no gain... keep going".

VIDEO: Hrithik Roshan's Strenuous Workout Has A Fan In Sussanne Khan. Read Her Comment That Is Stealing All The Limelight

Read some of the reactions below- 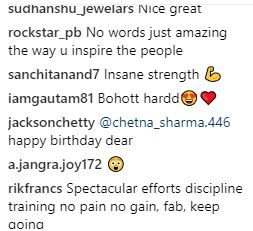 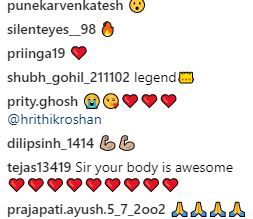 Prior, to this the actor has posted another video of a pulsating workout, where his ex-wife Sussanne Khan had commented saying that he looks hotter than he was 20 years before. Watch the video below-

Transformation journey Day 2. . Owing to too many injuries over the years I’ve adopted ZMR’s ( zero momentum reps). It helped my rehab along with gaining strength so much so that it’s now become a part of the HRX workout module at Cult.fit 1 rep could equal 1 minute. .n yeah that’s 10 pounds. (Gotto start somewhere right ?). . . And at the end your supposed to say faaaaaa....aaaa! ( a rule is a rule what can i say) . . PS: this used to be so much easier 20 years ago) . #NoPainNoGain #Hrx #onemorerep #createyourself #bethebestversionofyourself #therearenoshortcuts #doitforyou #workonyourself #pushboundries #keepgoing

On the professional front, the actor is all set to come back to the silver screen with 'Super 30'. As per reports, it is said to be a biopic on a mathematician who came up with a rather popular educational program. Besides Hrithik, the film also stars  Mrunal Thakur, Virendra Saxena and Pankaj Tripathi in the lead roles.