Nupur Sanon shared an unpopular opinion on the widely loved show, 'Schitt's Creek'. Said she had heard crazy reviews for it but did not find it engaging.


Nupur Sanon, sister of actor Kriti Sanon, took to Instagram on May 3, 2021, to share her opinion on one of the most popular and loved shows of this generation; Schitt’s Creek. Contrary to what most people feel she did not find the show engaging and felt that the reviews of the show did not live up to the hype. She shared a story on her Instagram handle where a screen with the name of the show can be seen, implying that she had been watching the show. 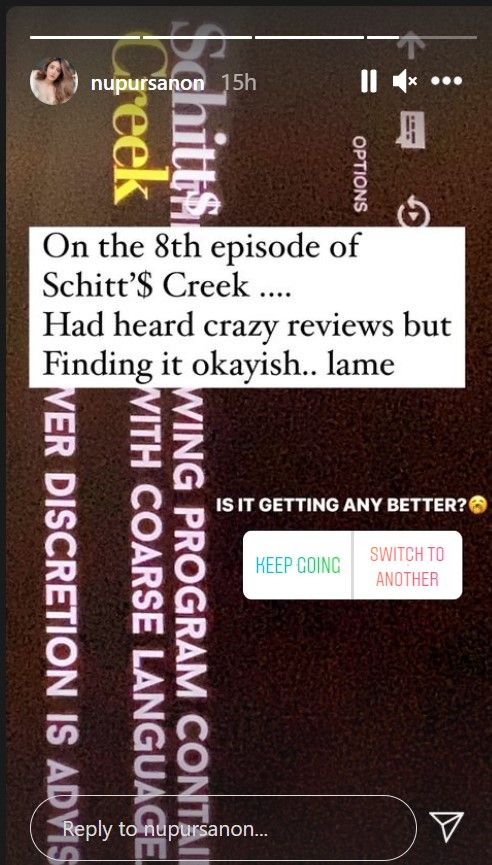 Nupur Sanon's opinion was further cemented by what she wrote in the picture. She said that she was on the 8th episode of the show and had only found it ‘okayish’. The show was not as good as the reviews had suggested it would be. She even so far as to call the show lame. Further, she asked her Instagram followers for their opinion on whether she should continue on and watch the show through or abandon it halfway and go watch something else. She also asked if the show was going to be getting any better and followed her question with a yawn emoji to show how bored she was so far.

Schitt’s Creek is a show that people have loved and has even won several awards. The premise of the show surrounds the Rose family who was once very wealthy but then fall from grace when they lose their wealth and estate. The family is then forced to leave their mansion and move to a motel in town. The show revolves around how the family learns to live without the wealth that they are used to and how they are faced with hilarious pitfalls on their journey to redemption. The series recently came to an end after several successful Schitt’s Creek episodes much to the grief of viewers.

The audience was not the only ones who had trouble bidding the show adieu. A member of the Schitt’s Creek cast was also struggling to say goodbye. Annie Murphy told US Weekly that she was not ready to be done with the show and was trying to get her onscreen brother Dan Levy to write a script for a film adaptation of the series. She even revealed that she was sending him 5 dollars every day to bribe him into actually writing it.