Ahead of the release of her social-comedy 'Janhit Mein Jaari,' actor Nushrratt Bharuccha appeared injured as she reached a venue for promotions. 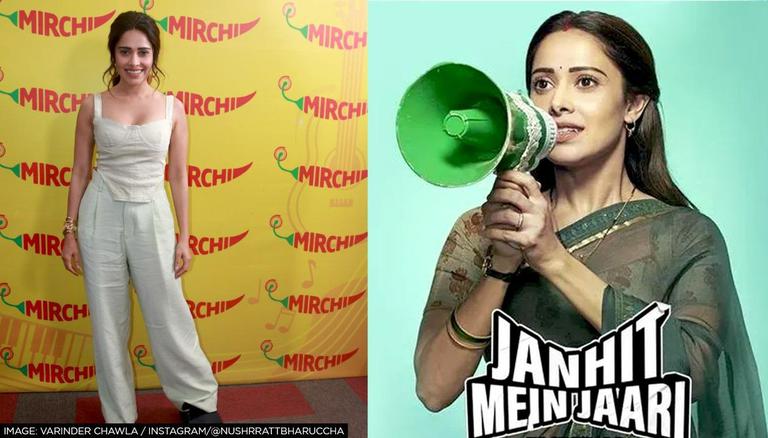 
Nushrratt Bharuccha is currently gearing up for the release of her highly anticipated social comedy Janhit Mein Jaari also starring Anud Singh. The film will portray the actor as a saleswoman who breaks the taboo by selling condoms much to her family's dismay. Helmed by debutant Jai Bantu Singh, the movie is set to release on June 10, 2022.

With the release date inching closer, the makers are leaving no stone unturned in promoting the movie. Amidst the busy promotion schedule, Bharuccha was spotted with a leg injury. Watch the video below.

A video from entertainment photographer Viral Bhayani showed the 37-year-old actor climbing down her car as she arrived at Radio Mirchi to promote Janhit Mein Jaari alongside Anud Singh. The actor donned a pastel colour jumpsuit and tied her hair in a low ponytail. She also wore a black plaster on her leg and appeared limping as she walked toward the venue.

As per a report from ANI, the actor had earlier sustained an injury in October while shooting the movie. While filming a Holi song on a massive scale, she sprained her leg. Following her injury, the shoot was halted for a few days as the actor underwent treatment.

The source had then said, "We had started shooting for the whole song on this massive setup that was created, but during a highly choreographed dance sequence shoot, Nushrratt sprained her leg. Initially, she felt she could take a break and continue shooting since along of crew members were a part of this. But after checkup and an x-ray, the doctor has strictly advised resting her food for three to four days."

The upcoming movie will mark the second collaboration between Nusrratt Bharuccha and Raaj Shaandiliyaa, who was the director of Dream Girl. The trailer of the movie was positively received as the audience enjoyed the new avatar of Bharuccha who took up the responsibility of raising awareness on the use of condoms and went against her family and society for the cause. The film also highlighted the preconceived notions of the topic and could become a cause to strike up a conversation regarding the same.