Madhuri Dixit took to her Instagram on the occasion of Arshad Warsi’s birthday. The duo was last seen in the movie 'Total Dhamaal'. Take a look at the post here

As seen on Arshad Warsi and Madhuri Dixit's Instagram 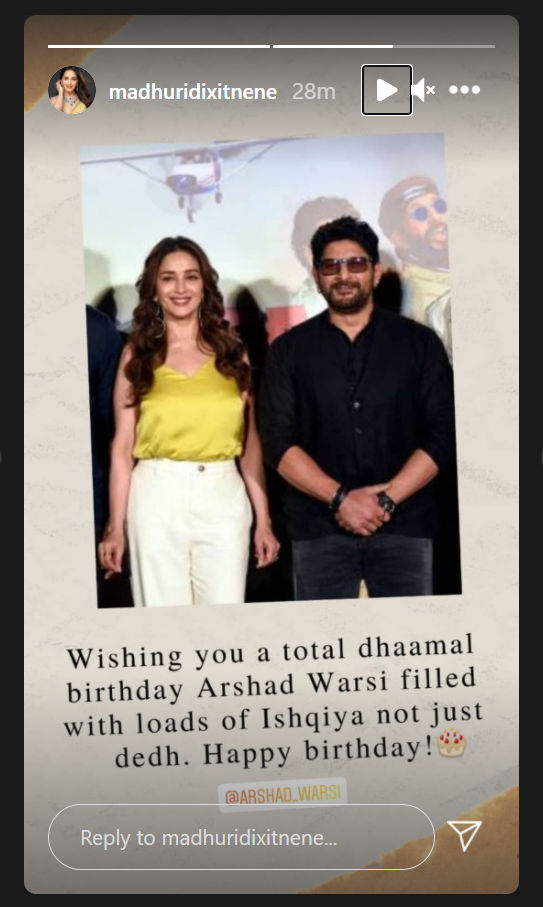 Bollywood actor Arshad Warsi is celebrating his 53rd birthday today, on 19th April. The actor was wished by his Total Dhamaal co-star Madhuri Dixit on his birthday. The duo was seen together on-screen twice - once in the black comedy thriller Dedh Ishqiya and next in the comedy movie Total Dhamaal. The actress shared a picture of the duo on her Insta story and wrote " Wishing you a total dhamaal birthday Arshad Warsi filled with loads of Ishqiya not just dedh. Happy Birthday".

Arshad Warsi was recently seen in the crime thriller Durgamati, which was a Hindi remake of the Telugu-Tamil movie Bhaagamathie. The movie featured Bhumi Pednekar in the lead role opposite Arshad. The actor will next be seen in the action-comedy Bachchan Pandey directed by Farhad Samji. The movie will also feature actors like Kriti Sanon and Jacqueline Fernandez in lead roles alongside Arshad. The movie is all set to release on 26th February 2022.

READ | Arshad Warsi reflects on COVID-19 lockdown, hopes 'someday it'll all be behind us'

The actor gained widespread popularity for his role as Circuit in Rajkumar Hirani's comedy-drama Munna Bhai M.B.B.S. This role also made him the recipient of many awards and nominations. He made his debut with the 1996 movie Tere Mere Sapne, and was later seen in many movies like Hero Hindustani, Hogi Pyaar Ki Jeet. Some of his popular roles include his role of Lucky in the movie Hulchul, which also featured Kareena Kapoor and Akshaye Khanna. His role in the crime drama Sehar as a police officer gained him critical acclaim. Warsi was then seen in the romantic comedy Salaam Namaste opposite Preity Zinta and Saif Ali Khan in lead roles.  A few of Arshad Warsi's films include Maine Pyaar Kyun Kiya?, the Golmaal franchise, Dhan Dhana Dhan Goal, Dhamaal, Ishqiya and Jolly LLB.