Actor Ranbir Kapoor's 39th birthday celebrations turned double after the makers of his next film Shamshera treated fans with his first look. 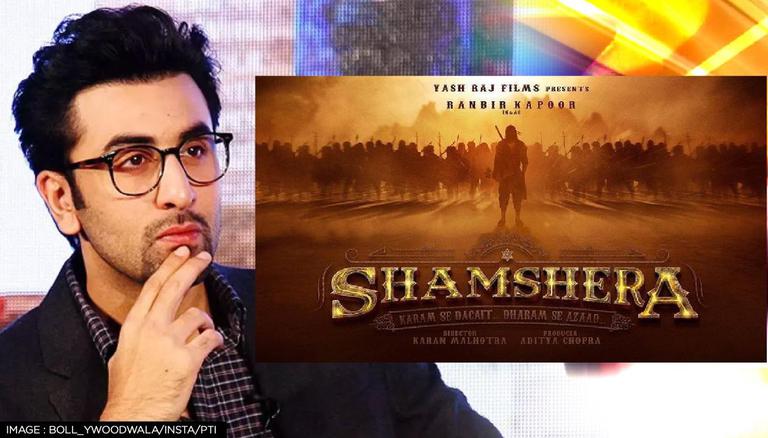 
Actor Ranbir Kapoor's birthday celebrations turned even more revelrous after the makers of his next film Shamshera treated fans with his first look. Film critic and trade analyst Taran Adarsh shared the look on Twitter and revealed that the film is slated to release next year on March 18, 2022.

Though Ranbir’s face is not completely visible in the first glimpse, yet the fierceness in his eyes and long locks justifies that his character will be a visual treat for all his fans. Ranbir Kapoor had earlier revealed about what the film is based on and what it will be about. He revealed in an interview with PTI, “Shamshera is not a story of a ‘daaku’, but a film based in the 1800s, it is about a dacoit tribe who are fighting for their right and independence from the British. There was a great story of heroism, a story rooted in our country which actually happened back then.”

He added, “It is a departure from the kind of films I have done, it is not the coming-of-age lover boy roles which I have done often. Shamshera is in the aspirational space, the space of the true, badass commercial cinema. A true blue Hindi film has everything- comedy, action, romance drama. And all these films I am doing are all in that direction, we are trying to have all these factors in it.”

The film which is directed by Karan Malhotra, also stars Sanjay Dutt, Vaani Kapoor, Ronit Roy, Ashutosh Rana, and Aahana Kumra in key roles. According to various media reports, Vaani is said to be playing Ranbir’s love interest, Adarshini in the film. Ranbir recently jetted off to Jodhpur along with his rumoured ladylove Alia Bhatt to ring in his special day together. Several videos and pictures of the two walking out of the airport together have been surfacing on the Internet. The two stars will be seen together sharing screen space in in filmmaker Ayan Mukerji’s directorial Brahmastra. On the other hand, Ranbir Kapoor will also be seen in Sandeep Vanga Reddy's Animal, and an untitled film with Shraddha Kapoor, directed by Luv Ranjan.

WE RECOMMEND
Ranbir Kapoor's birthday: Here are top 5 IMDb rated films of the actor
Akshay Kumar's Prithviraj to Ranbir's Shamshera, YRF announces release dates of 4 films
Ranbir Kapoor's sister Riddhima Kapoor Sahni does not take 'panga' with actor; here's why
Ranbir Kapoor might be roped in for an upcoming OTT anthology 'Aisa Waisa Pyaar'
Ranbir Kapoor to shoot a special track for 'Mr Lele' as filming starts this week
Listen to the latest songs, only on JioSaavn.com