On Shab-e-Barat, Adnan Sami's message on social media was accompanied with an intense performance and netizens were bowled by it, calling it, 'beautiful'.

A symbol of India’s diversity has many festivals or events of different religions often being marked at the same time. It was a similar occurrence during the weekend, when Holi, Shab-e-Barat and the Holy Week, among others being marked. While celebrities of the film industry conveyed their wishes for Holi, Adnan Sami had a special video to mark Shab-e-Baraat, an occasion seeking forgiveness from the Almighty.

Adnan Sami performed a rendition of his hit track Noor-e-Khuda, composed by Shankar-Ehsaan-Loy, from the movie My Name is Khan to convey his message on Shab-e-Baraat. Performing in just candle light, the singer-music composer was too immersed in emotions as he played the piano and treate fans to his powerful and melodious voice.

The Tera Chehra arist wished ‘Shab-e-Baraat Mubarak’ to everyone, and prayed for forgiveness & god’s blessings for a ‘long healthy & happy life.’ He termed it as a ‘night of prayer’.

Netizens were bowled over by the video an praised it, calling it ‘heart-touching’, ‘beautiful’ and more. 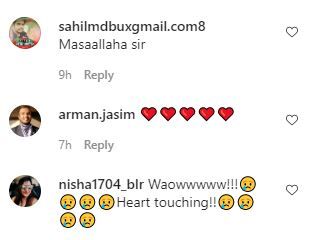 Meanwhile, on the professional front, Adnan Sami had been felicitated with the Dadasaheb Phalke International Film Festival Award for ‘outstanding contribution in music industry’ last month. He had then termed it as a ‘beautiful honour’.

The singer’s last release was the single Tu Yaad Aya in February last year. The track had featured Adah Sharma alongside him, and was lapped  up his fans, with the song earning 31 million views in the span of a year.