Kangana Ranaut and her sister Rangoli Chandel have been hitting headlines for the controversial statements and war of words on social media.

After taking a jibe at Alia Bhatt, Ranbir Kapoor, Mahesh Bhatt and Soni Razdan, Rangoli Chandel has something to say to Richa Chadha. The 'Fukrey' actress on a chat show said: "If I have a problem with someone, I wouldn't have a war of words with them on a public platform. This is because I don't want to say it. Not because I lack the courage. I have the courage and I want to say it sometimes, but I'd say it one-on-one."

Reacting to the same, Rangoli took to her Twitter and raised some questions to Richa and told her to 'take a seat' because according to Rangoli, 'If she could, she would'. She concluded by sharing a message for all the young women who aspire to become like Kangana Ranaut and wrote: Also my sincere advice to all lovely young women out there who r aspiring Kangana Ranauts pls build yourself first then choose ur battles, many heros have fallen,Kangana survived cos she prepared for today many years ago. Struggle, strategy & collective well being is the matra." [sic] 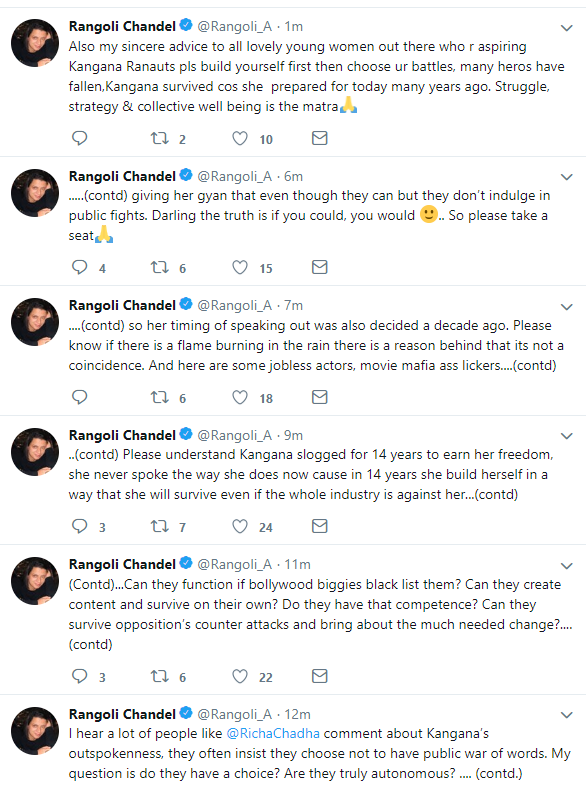 Meanwhile, Hrithik Roshan announced on Thursday he was shifting the release date of "Super 30" to save his film from being "desecrated by yet another media circus" but Kangana Ranaut alleged that he was in on the decision from the beginning.

Though he did not name Kangana in his statement, which was posted on Twitter, Hrithik made it clear that the decision was taken due to their long-standing ugly public feud.

"So as to not allow my film to be desecrated by yet another media circus, I have decided to shift the release date of my film 'Super 30' in order to save myself from the personal trauma and toxic mental violence this would cause.

"Despite the film being ready, I have requested my producers to shift and announce the next suitable date as soon as possible," Hrithik wrote.

"Mental Hai Kya" recently shifted its release date to July 26, only to coincide with the theatrical arrival of "Super 30" but producer Ekta Kapoor said the decision had nothing to do with Kangana's equation with Hrithik.

In her response, Kangana said in a statement, "Hrithik Roshan, Madhu Mantena and Ekta Kapoor had collectively decided that Hrithik would push 'Super 30's release date and Ekta will bring her film MHK on 26th July."

"They had taken this call last week itself, I don't know why he wrote this sob story but I am glad MHK (is) getting a solo release, I salute my producer Ekta Kapoor for making her way in this male dominated industry, it's not easy to do what she does... I applaud her courage and power," she further said.

In his statement, Hrithik called the negativity surrounding the release of his film a "blatant case of harassment".

"Over the past few years, to utter dismay, I have been witness to a lot of us cheering and encouraging what was/is an open and blatant case of harassment. I must even now, wait patiently and silently for the collective consciousness of society to take cognisance of such matters in order to maintain our faith in civility of our society.

"This unrelenting helplessness must end," he added.

Hrithik and Kangana have a long and complicated history.

In 2016, Kangana claimed that they were in a relationship but Hrithik said it was not true. The fight became public after Hrithik sued her and Kangana counter-sued him.