The fact that Prime Minister Narendra Modi enjoys a massive popularity not just in India but also across the world is well-known. One doesn’t need to go too far to witness this, the admiration expressed for him by stars from the film industry is proof of it. Much before PM Modi stepped into his second term as the Prime Minister, a selfie involving some of the biggest names in B-Town had gone viral, after which the stars had conveyed their feeling of pride. Before the general elections earlier this year, many of them had openly vouched for PM retaining his chair and numerous stars have expressed their delight when PM Modi-led National Democratic Alliance was elected with a thumping majority in the Lok Sabha polls. A film on him and a web series were some of the other notable features. On PM Narendra Modi’s birthday on Tuesday, B-Town stars in a big number extended their greetings on social media.

Wishes and praises for PM Modi

Ajay Devgn called PM a ‘MAN who walks the talk with INDIA’. Madhur Bhandarkar thanked PM for ‘continuous efforts for reformation and development of our great nation.’ Madhuri Dixit Nene wished, “May our country continue to benefit from your strong and dynamic leadership!” “Thank you for inspiring and leading us by example,” wrote Suniel Shetty. “May India keep progressing and growing under your guidance,” was Disha Patani’s message.

Arjun Kapoor tweeted, “Your selfless dedication & hard work towards the country is what inspires all of us !!!” Sidharth Malhotra described PM Modi as the ‘boldest and dynamic leader of our country.’ Raveena Tandon hoped India becomes a ‘strong united and prosperous nation’ under PM’s leadership. Karan Johar prayed that the ‘great country grows from strength to strength’ with PM’s ‘guidance and love’. Anupam Kher tweeted, “May you continue to lead our nation for many many years to come.” Vivek Oberoi, who played PM Narendra Modi in a biopic on him earlier this year, shared a special video message along with a montage of PM’s memorable moments.

Here are the wishes of Bollywood stars for PM’s good health and a good year ahead: 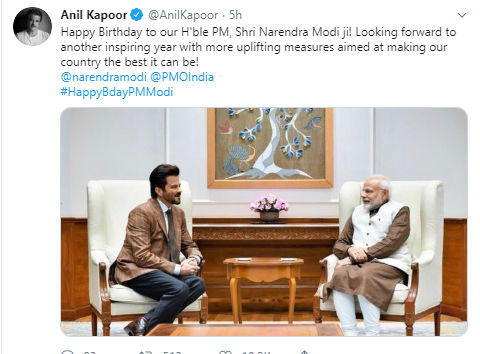 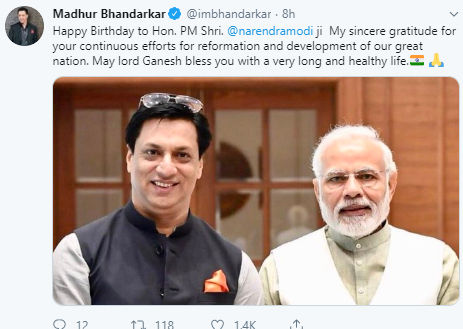 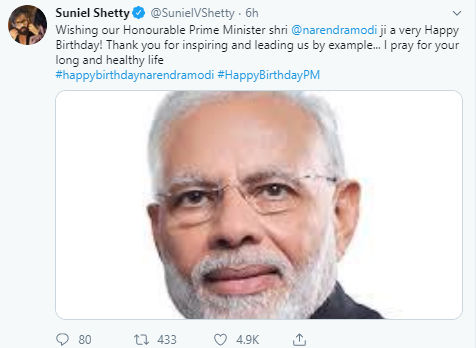