Actor Pooja Batra was among the special ones who had the privilege to meet Hollywood’s iconic actor Al Pacino and watch his iconic film 'And Justice For All'. 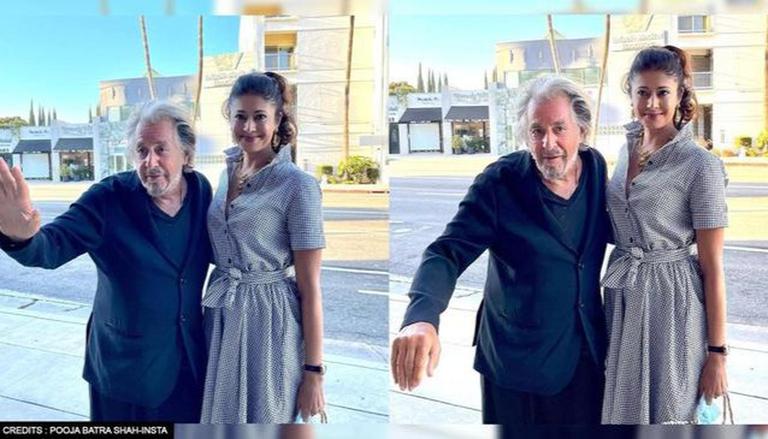 
Actor Pooja Batra was among the special ones who had the privilege to meet Hollywood’s iconic actor Al Pacino. Pooja took to Instagram and shared a picture with the stalwart and expressed her privilege to watch his iconic film And Justice For All with him in the theatre. In the pictures shared by Pooja, she can be seen smiling and posing with Al Pacino while thanking him for the special movie time.

In the Instagram post, Godfather actor was seen dressed in all black, while Pooja chose a black and white gingham dress for the occasion. While sharing the pictures, she wrote, “With the legend himself #AlPacino Such an honour. Thank you @gshiraz for the afternoon with Al Pacino watching his movie ‘And Justice For All’...” Her husband Nawab Shah was among the first ones to comment. “Awesome,” he wrote and dropped a heart emoji in the comments section of her post.

Apart from this, she also shared a few videos from the movie screening that showed Al Pacino addressing the audience at the theatre. She wrote, “Al Pacino. When you hear the legend himself.” Al Pacino’s film And Justice for All is a 1979 courtroom drama that was directed by Norman Jewison and featured Jack Warden and John Forsythe. The screenplay was nominated for the Oscars that year and was written by Valerie Curtin and Barry Levinson. The Scarface actor also earned an Oscar nomination for his performance in the movie.

On the other hand, Pooja, who is also a former Miss India is known for her roles in '90s hits such as Haseena Maan Jaayegi, Nayak, and Virasat. Her film Taj Mahal An Eternal Love Story was screened at the Cannes Film Festival in 2004. She will be seen next in Squad, an upcoming Hindi action film written, directed, and produced by Nilesh Sahay. As for Al Pacino, he will star alongside Morgan Freeman, Helen Mirren, and Oscar nominee Danny DeVito in Sniff, a stylish reinvention of the film noir genre that will be helmed by Taylor Hackford.